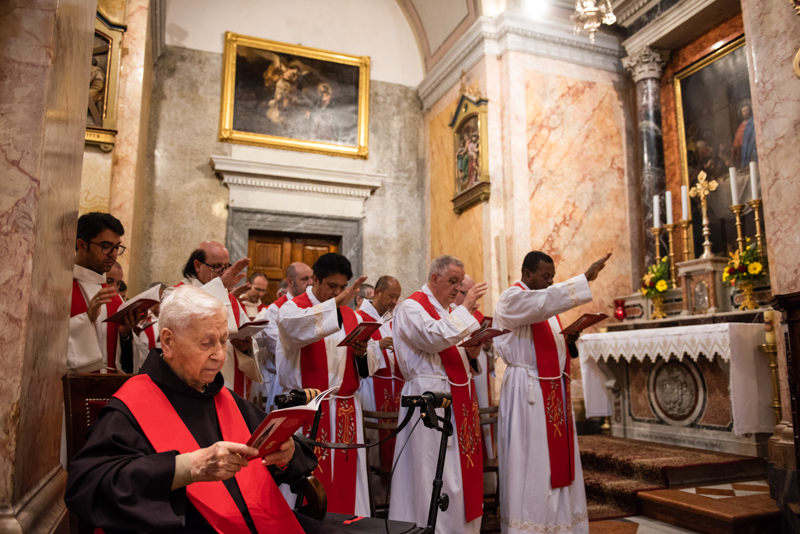 It was an October morning in 1937 when Fr. Mario Tangorraset off for the Holy Land for the first time. He was thirteen years old and was carrying no certainties, except the desire to follow God, wherever he would have taken him. Today, at ninety-six, the Franciscan friar is a precious witness to recall the past of the Custody, which he has served for almost a century. From the rooms of the infirmary in the Convent of St Saviour in Jerusalem, Fr. Mario goes over the changes in his life and in those of the friars of the Holy Land.

The vocation for the Holy Land
Everything started from his vocation to become a Franciscan, which Fr. Mario felt when he was twelve, in his village in the south of Italy, Valenzano (Bari). He wanted to enter the convent of the local Franciscan province, but his large family could not afford him to. It was a missionary friar in the Holy Land, Fr. Bonaventura Cacucci, in the village talking about the work of the Franciscans in the Land of Jesus, who was to be decisive for his life. The friar explained that the Custody would accept the youngster for his formation, without the need for any economic contribution.
“My mother knew very well that I would not have come home for at least ten years,” said Fr. Mario, “yet she wanted me to go. I would write to her two or three times a year, but I was given permission to go home only fifteen years later. When I got off the train, I saw a girl I did not know: she was a sister I had not seen grow up.”

Formation and internment in Emmaus
What was the formation of the young aspirants in the Custody of the Holy Land like, more than eighty years ago? Fr. Mario explained that the future friars of the Holy Land were formed in Emmaus Al-Qubeybeh, where there was the international seminary. Today there are still old group photos on the walls of the convent as evidence of the past. The young men, who came from all over the world,  studied all the subjects of secondary school as well as the local language, Arabic. They led a life in common, a life of prayer and a life of study.
When the Second World War broke out, an unexpected fact threw the lives of the friars upside-down. The region was under the protection of the British and therefore the Italians there (belonging to an enemy nation in war) were considered enemies and therefore imprisoned. There were more than one hundred Italian friars at the time and they all came to Emmaus, the place the British had decided for internment, where they remained from June 1940  until 1943. “You could not go where you wanted and twice a day the British assembled us in front of the church for the roll call,” Fr. Mario continued.  “There was plenty of food, but there was no freedom of movement. I was still a youngster and I was a boarder at the school, but for those who before had worked in the schools or parishes, it was a more difficult period.”
The friars of other nationalities, belonging to countries that had not declared war on Britain, remained in the shrines. It was not until after the armistice that the British granted more freedom of movement, although limited.

Life at the service of the Holy Land
Fr. Mario recalls the difficulties, even during other subsequent conflicts. “During the Arab-Israeli war, they decided to move us, students, to Jericho for a few months, for reasons of safety,” says the friar. “We began to walk from Jerusalem, taken with us only some linen and a few books.”
After his Novitiate in Bethlehem and ordination in Jerusalem, Fr. Mario maintains that “he risked martyrdom to defend the rights of the Catholics in the Holy Sepulchre.” These were the words that the Custos of the Holy Land of the time used with him, when he told him that he was to have sung his first mass in front of  the empty tomb of the Sepulchre, although with the risk of exceeding by a few minutes on the time allowed by the Status Quo for the Catholics. An agreement was then reached between the Churches, but Fr. Mario has not forgotten the feelings of those difficult few hours.

Fr. Mario served the Custody of the Holy Land in Milan, where the Centro Propaganda e Stampa was opened, with its legacy going to create the Edizioni Terra Santa. From there, he was sent to work in the pilgrimage department of the Delegation of the Holy Land in Rome, with the task of accompanying groups between Italy and the Holy Land. “I then spent eight years in Nazareth, as director of the Casa Nova, until they sent me as Commissary of the Holy Land to  Palermo,” he continues. “After four years I returned to Rome, and today I am in Jerusalem,”  concluded Fr. Mario.