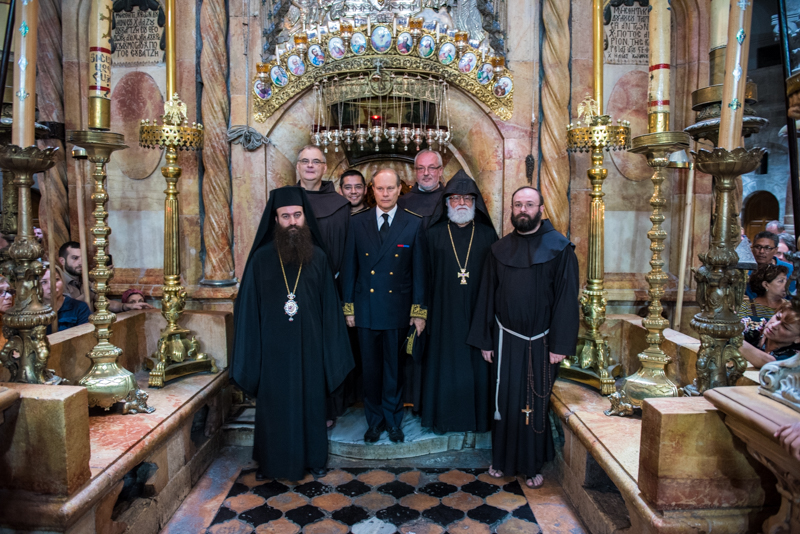 On Wednesday 6th November, despite the crowd at the Basilica of the Resurrection, the non-stop flow of pilgrims was blocked for a few moments.
The Franciscans of the Custody of the Holy Land, who had arrived from the Jaffa Gate, were accompanying the new Consul General of France, René Trocaz, for his entrance into the Holy Sepulchre.

When the Custody had already set its roots in the Holy Land, the Sultan Suleiman the Magnificent, with the Treaty of the Capitulations of 1536, entrusted the protection of the Holy Places to France. From then on, the Custody and France have worked together, each in their own way, to care for the holy places and protect the local Christian communities.

The Custody received support from other Latin nations: Italy, Spain, and Belgium. This support, together with the French support, is recalled in various circumstances throughout the year, but history has wanted the Consul General of France to be entitled to an entrance to the Holy Sepulchre.

Opposite the Tomb, the Custodial Vicar Fr. DobromirJasztal, said these words to him: "For a believer, there is no better greeting than to invoke the blessing of God on the person being received. For a Christian, there is no stronger place than this empty tomb, the place where Jesus made us free men, free from death and sin. For a Franciscan, custodian for 800 years of the holy places and at the service of the Christian community, nothing is more important than being faithful to the mission that has been entrusted to him.”

Immediately afterward, the Gospel of the Resurrection was said in Latin, followed by the blessing of the new Consul General Trocaz and his mission. The Vicar then accompanied the Consul General to the tomb with Fr. StéphaneMilovitch, head of the Department of the Cultural Heritage of the Custody.

The assembly then returned the tomb to the devotion of the faithful, while Fr. Stéphaneled the Representative of the French nation and his delegation on a short visit of the building.

On the esplanade of the Basilica, the Franciscan friars were waiting, ready to escort the Consul General, his entourage and a large crowd of French people who live in Jerusalem to the Church of St Anne, which belongs to the French government. At the church, the Missionaries of Africa who are responsible for the site welcomed him at the door for a solemn entrance to the sound of the Te Deum. At the end of the brief celebration, the Consul General thanked the Custody, the White Fathers and the Assembly, saying that France, through him, has renewed its commitment, in particular to the service of the Christians of the Orient, alongside the Christian institutions which welcomed him today.

A reception concluded this out-of-the-ordinary episode. 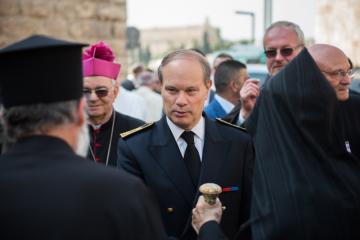 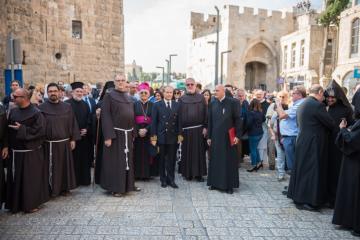 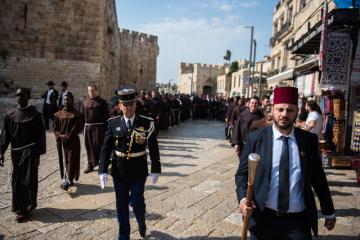 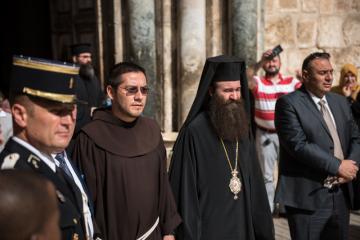 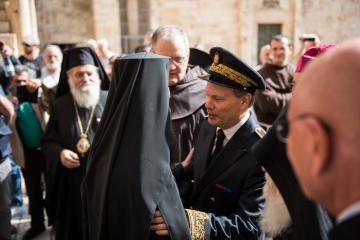 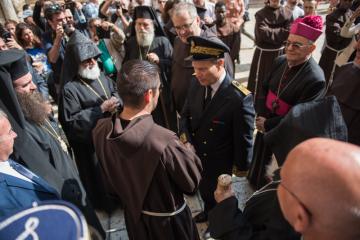 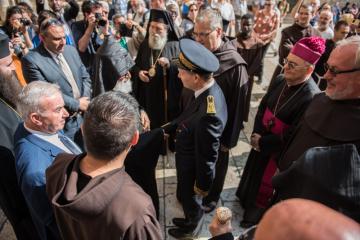 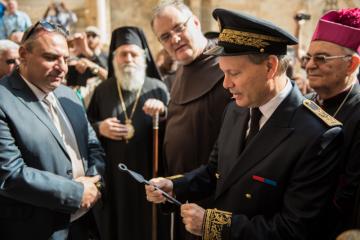 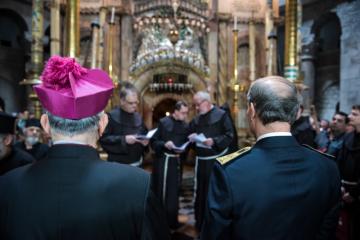 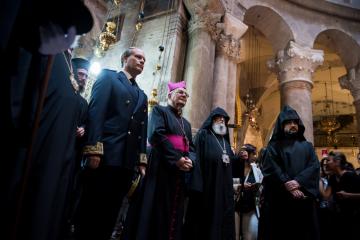 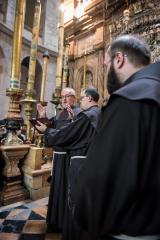 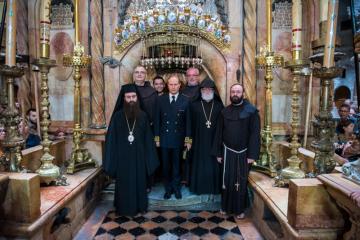 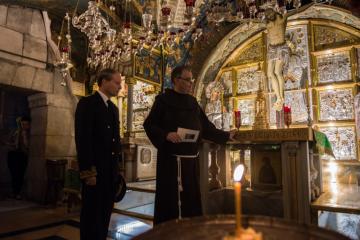 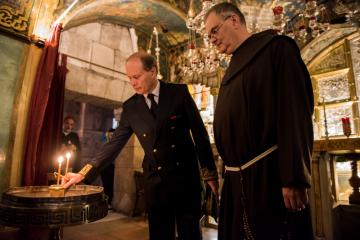 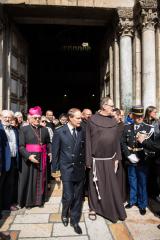 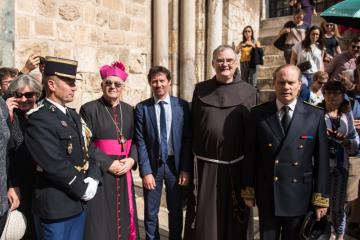 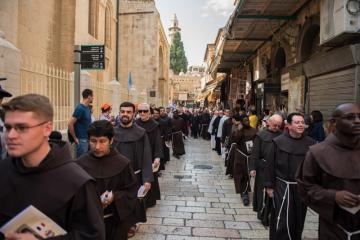 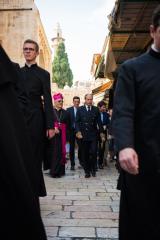 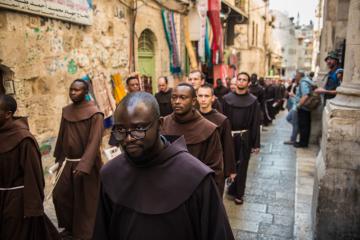 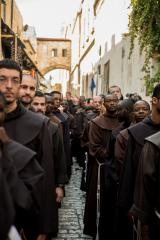 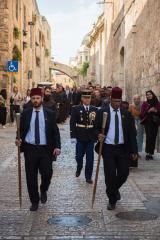 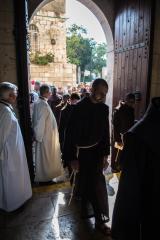 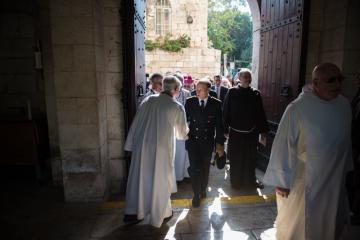 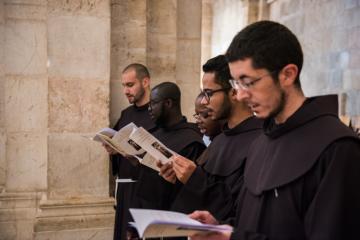 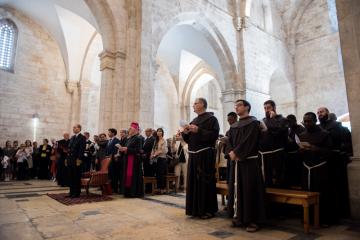 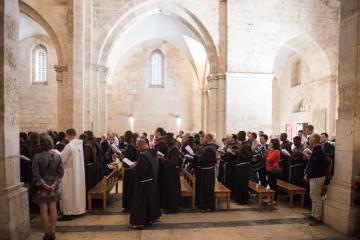 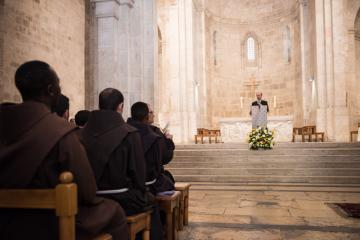