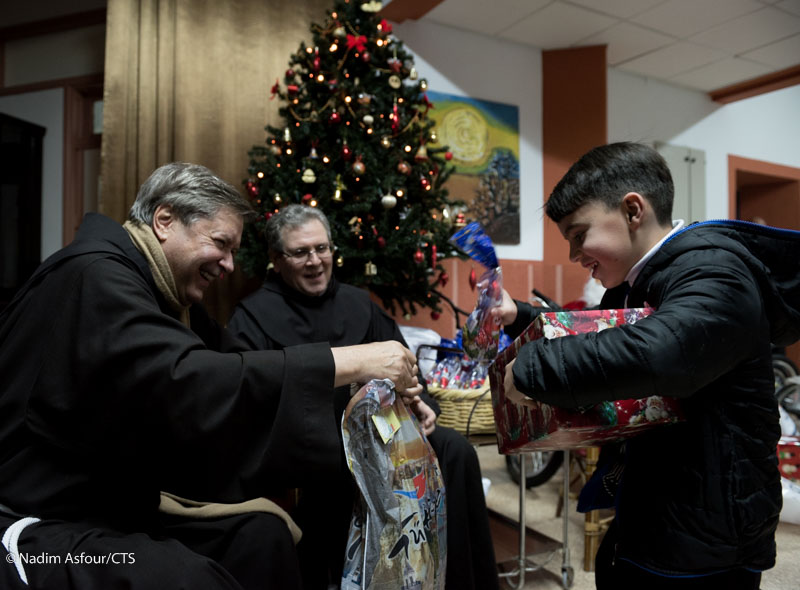 THE FOUNDATION. The foundation has since continued to become more structured. “Fr. Artemio Vitores (now guardian at the monastery in Bethlehem) introduced me to Denise Scalzo, who is presently the vice-president in helping me to set up the foundation. She was very collaborative and helpful’’ said Fr. Peter. The present board of trustees of the foundation is composed of twenty highly professional individuals, along with two Cardinals, the Apostolic Nuncio to the U.S. and two other bishops. The board also has a public relations firm, who manages a staff of five employees along with an accounting firm of fifteen employees. The foundation has several regional chapters in Indiana, Georgia , Ohio, , Florida, Texas and Nebraska. Its president, Fr. Peter F. Vasko is based out of Jerusalem but travels several times a year to take care of the foundation’s activities and to meet with benefactors. He has a true Franciscan vocation: ‘By the age of 30, I had become a very successful marketing executive having houses, cars and wealth., things that in the corporate world are a sign of material success. Yet, I was empty inside so I spent the next year praying on weekends at a Trappist monastery, reflecting on who I am and what does God want from me. Eventually I saw that material things do not bring happiness but rather living a life dedicated to God and to his people. What I found was the ‘pearl of great price” and sold everything and applied to the Custody’s monastery in Washington D.C. and thus began my life as a Franciscan.” Today Fr. Peter works tirelessly for the Franciscan Foundation and helping it to grow, along with the board, each passing year.

FUNDAISING PROJECTS. The biggest fundraising project that FFHL has is the College Scholarship Program which but have great academic talent and abilities. The president of the foundation has a clear goal in mind: “We are doing this for the future of the Christian community by creating the new leaders in our community. “ There have already been 165 students who have graduated while 254 students are presently attending college.
In the field of music the FFHL has already awarded more than 100 scholarships to the Magnificat, the music institute of the Custody of the Holy Land.
Every year, over $35,000is given to the Bethlehem Social Services for medicine which helps more than 100 individuals.
In Bethlehem, FFHL operates the Franciscan Boys Home, an entity that provides a home for boys, ages 8-14 coming from difficult family situations and staffed by professional social workers and teachers within a healthy psychological atmosphere.
In the area of housing, FFHL has provided $2.6 million to build 26 apartments for Christian families in the Jerusalem/ Bethlehem area.
FFHL has also gotten involved in developing sports programs such as the Children Without Borders program which provides uniforms , equipment , salaries of coaches , and transportation for soccer games for over 1,250 children in Jericho, Jenin, Bethlehem, Beit- Jala and Beit- Sahour.
If you want to have an idea of the tremendous support that the Franciscan Foundation provides for the Holy Land, just consider that in 2017, the foundation donated to the Custody $ 1.6 million and the figure increases each year.

MEETING WITH DONORS. The foundation’s work also focuses on raising public awareness of the hardships faced by Christians in the Holy Land. The best way to do that is by having gatherings of pilgrims from other countries to meet and talk to the local inhabitants and in this case, Fr. Peter gathers together several of FFHL students who have graduated and are professional employed to come and speak with pilgrims about the difficulties that they face as Christians in the Holy Land. “People can see a living witness speaking about their life, their difficulties as well as their successes here in the Holy Land” remarked Fr. Peter. Many of them are struck by the sufferings that the Christians face, and with their donations, they try to help ensure that the Christians presence in the Holy Land can continue.

HOPE FOR CHRISTIANS IN THE HOLY LAND. “Our founder is Jesus who was born in this land. If we do not have the sense of who we are and of our heritage, how can we say to follow Christ?” said Fr. Peter. “Without the Church of Jerusalem, how can there be a Church in London, San Francisco and New York?” The president of the Franciscan Foundation for the Holy Land feels very strongly about this and travels and works tirelessly every day. During his last visit to the United States, he met people from 13 different cities and, thanks to the help of three fundraisers, he was able to find new generous donors.
Buy why should anyone support the Holy Land? Because as Fr. Peter has said so many times, ‘’It is the Cradle of Christianity and it is dying and we as the mystical Body of Christ, have an obligation to keep it alive. If we don’t, then the Holy Sites of Christendom will simply become empty religious monuments and museums with no living, worshipping community. By giving hope to the young Christians here in the Holy Land through the various humanitarian programs especially in the field of education, we will be preserving and maintaining the Christian presence in the Holy Land for the future. That is what FFHL is all about!".