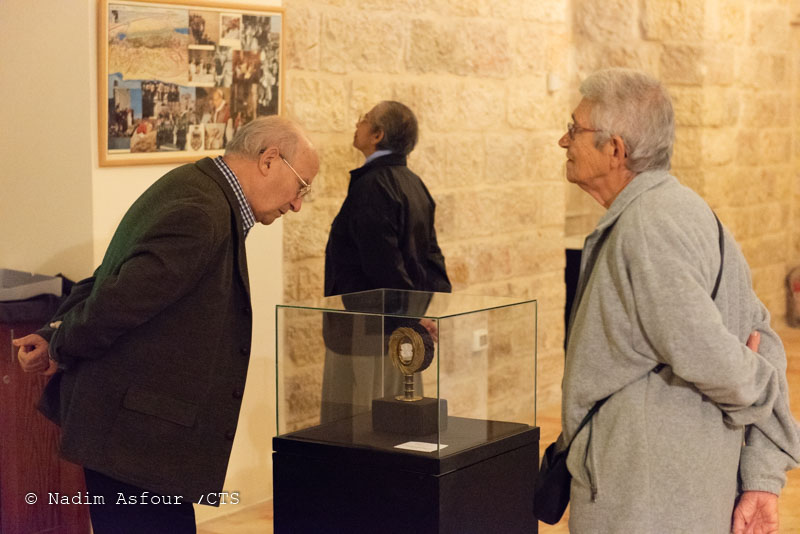 Following the canonization of Blessed Paul VI of October 14, the Franciscans of Jerusalem and the Office of Cultural Heritage organized an exhibition to retrace the Pontiff’s first apostolic visit to the Holy Land, dating back to 1964.

During the opening on October 31, visitors were able to admire the liturgical objects related to the mass celebrated by the Pope at the Holy Sepulcher: the wooden altar, the candelabras, the papal missal, the chalices and the patens, as well as the vestments that were used, such as the casubles, stoles, and, according to the ritual of the time, the papal shoes. Alongside the liturgical elements, there is also a part of the collection of stamps and medals made by the Custody on the occasion of Paul VI's visit.

Among the major works presented, there are three very important gifts: the golden rose left by Paul VI in Bethlehem, the precious diadem of Our Lady of Nazareth and the olive branch of peace. In order to link these liturgical objects to the Holy Father’s journey, the exhibition is laid out in 14 panels presenting the evangelical sites visited by Paul VI and the main ecumenical meetings of his pilgrimage.
During the opening event, some of the speakers included: Fr. Francesco Patton, the Custos of the Holy Land, Mons. Leopoldo Girelli, the Apostolic Delegate in Jerusalem, Fr. Claudio G. Bottini, a Professor Emeritus at the Studium Biblicum Franscicanum, and Fr. Stéphane Milovitch, who is in charge of the cultural heritage of the Custody and who is one of the organizers of the exhibition itself.

All of the speakers highlighted the historical, prophetic and modern importance of this “Pope of the Council,” “one of the most intelligent people of this time,” said Mons. Girelli. To give an account of the spiritual importance of Paul VI, Fr. Stéphane concluded the opening event by reciting a prayer that the Pope had said before the place of Resurrection:

"We are here, Oh Lord Jesus.
We came as the guilty come back
to the place of their crime.
We came like the one
who followed you and who even betrayed you,
so often faithful and so often unfaithful.
We came to recognize
the mysterious relationship between our sins
and your passion: our work and yours.
We came to beat our chests,
to ask you for forgiveness,
to implore your mercy.
We came because we know you can,
and that you want to forgive us,
because you have atoned for our sins.
You are our Redemption and our hope.”