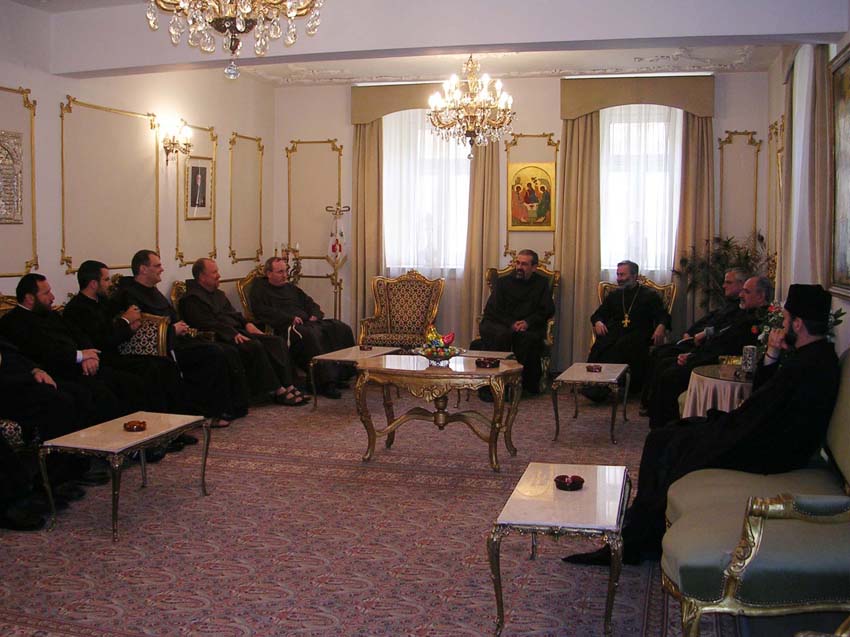 On Tuesday 19 April, the Custos of the Holy Land, Fra Pierbattista Pizzaballa, accompanied by a small delegation, went to the Greek Catholic Patriarchate in Jerusalem to present the Custody’s Easter greetings to Fr. Mtanios Haddad, patriarchal vicar of the Melchite Church. Some priests from the Patriarchate accompanied Fr Haddad. For the Custody and its vicar Fra Artemius Vitores, this has been an opportunity for an exchange of ideas with the Arab clergy regarding the latest developments in the political relations between Israel and Palestine as well as the effects of the blocking of American and European funding. Such meetings are not simply a diplomatic exercise; both the Franciscans and the Greek Catholic clergy live among and at the service of the Christian population, whose position is becoming more critical by the day within the territories under the Palestine Authority. All are deeply concerned for the future of all the faithful as well as for the other inhabitants of this country.

Later in the afternoon, His Beatitude Michel Sabbah, accompanied by his coadjutor Mgr. Fouad Twal, Mgr. Kamal Bathish, auxiliary Bishop and a delegation of various priests from the Patriarchate and canons from the Holy Sepulchre, came to visit the Custos and the community at Saint Saviour. Informal conversations over refreshments, exchange of news and fraternal sharing about the days spent together in prayer – during the long but moving celebrations of Holy Week in the Basilica of the Resurrection – livened the Paschal meeting. From the reception hall, His Beatitude then went to the infirmary to greet the older and sick friars. For all those present this was a welcome break after the feasts, which even if they stole hearts, also meant a little less physical rest. This was an appreciated moment for its simplicity. It was an occasion to reaffirm, “Christ is truly risen, Alleluia!”