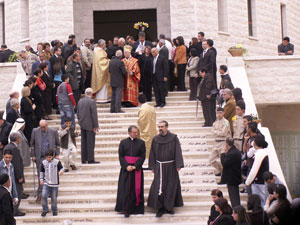 The Holy Synod of the Greek-Catholic Church elected Fr Elias Chacour Metropolitan Archbishop on the 7th February 2006. Having been confirmed by Rome on the 17th, the Archimandrite Elias Chacour received the ensignia of his episcopate in the Church at Ibilline, of which he had been Parish Priest, on Saturday 25th February. The Custos, Fra Pierbattista Pizzaballa, joined the numerous authorities who flocked to pay homage to the new bishop together with an immense crowd of faithful from Galilee as well as all those who managed to get to Ibilline from Judea. The ceremony was scheduled to start at 10:00, but by 9:30 the church was packed and the security personnel had to direct the faithful to an underground hall in which a giant screen had been set up for the occasion. The sport ground, adjacent to the church, was also full of people. It too had been set to welcome the remaining participants. The procession that crossed the sport ground on its way to the church afforded the new bishop an opportunity to meet all the people who greeted him warmly with applause and shouts that were audible inside the church. During the three-hour long celebration in Arabic, presided over by the archbishops Georges Murr, Boutros Moullem e Isidoro Batticha, Abuna Chacour became Sayedna. The dignified and joyous celebration was very beautiful and was even transmitted on the Lebanese TV Channel Tele Lumiere. The television viewers could follow the proceedings that were rich in symbolism and striking moments as could the people watching the giant screens. The call to the candidate, his answer and profession of faith were followed by prayers from the bishops present who were joined by His Beatitude Mons. Michel Sabbah, the Latin Patriarch. The four bishops had one hand on the Bible and the other resting on Mons. Chacour’s Head, while he knelt in front of the altar. After this the bishop was given the Episcopal insignia that were brought in procession to the altar by the laity. Each insignia brought an acclamation from the assembly that sang its gratitude to the Lord. A long applause marked the end of the Episcopal ordination proper. The celebration continued with the Eucharist.

During his homily Monsignor Chacour invited the faithful to persevere every day. He also said a few words in French to thank France for all it had given him during his studies there as well as during his numerous journeys. After communion the faithful lost no time in emptying the church and waited outside to acclaim once again the bishop who received the good wishes of the authorities and the faithful in a reception hall. The ceremony was attended by representatives of the different Oriental Orthodox Churches as well as several Latin religious. Apart from the Custos, the Custody of the Holy Land was represented by a delegation of Friars from Galilee.


Mons Chacour has succeeded Mons Boutros Mouallem who reached the age limit in 2003. 67-year old Fr. Elias Chacour, an Israeli born in a Catholic Arab family in Biram in Galilee in the north of Israel, had been parish priest of Ibilline and president of the Mar Elias Educational Institutions. He is known for his commitment in fostering peace and reconciliation among the Jews, Christians and Muslims. The Mar Elias University Campus, founded in 2003 is the first Arab-Christian University in Israel and has at present 120 Jewish, Christian, Muslim and Druse students.

Born in 1939, he completed his secondary education in Nazareth, and then studied theology in Paris, at the Saint-Sulpice Seminary and later at the Sorbonne. In 1968 he was the first Palestinian to obtain a degree in Biblical and Talmudic studies from the Hebrew University of Jerusalem. In 1972 he obtained a Doctorate in Ecumenical Theology from the University of Geneva, followed by six Doctorates Honoris Causa from European and American universities.