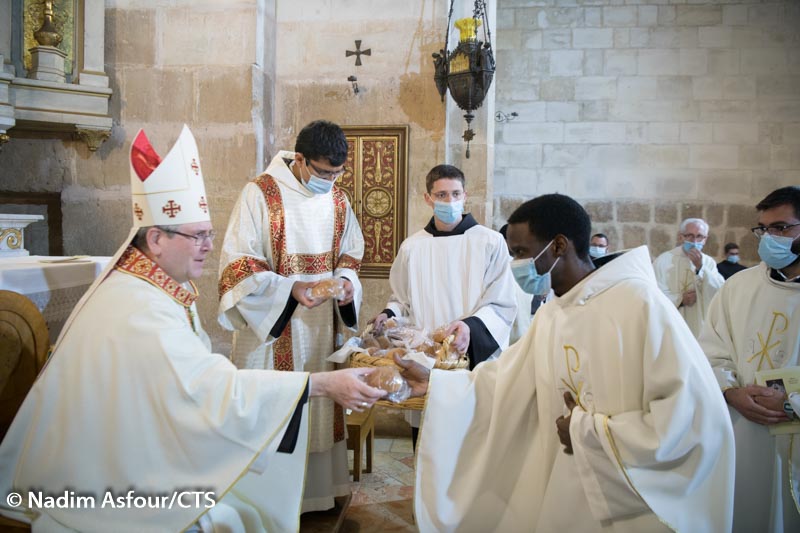 On « Monday of the Angel », the day after Easter, the Gospel mentions the episode of the two disciples who are walking towards a small town 60 stadia from Jerusalem called Emmaus. On 5 April, the Franciscans of the Custody, led by the Custos of the Holy Land, Fr. Francesco Patton, remembered this passage from the Gospel at the Franciscan shrine of Al-Qubeibeh.

The Basilica of the Manifestation of Our Lord Jesus Christ. This is the name of the shrine where the apparition of Christ arisen after the resurrection is venerated. The Gospel specifies the name and the distance (60 stadia, a measure of length for the Romans, corresponding to about 11 kilometres) of the exact place. Al-Qubeibeh is the most recent site that has been acknowledged as  Emmaus: the Byzantines had identified another site several kilometres away, Nicopolis, where a shrine still stands, but the Crusaders moved it to Abu Gosh because Nicopolis was 160 stadia from Jerusalem, which according to some codices, was too far.

At the end of the Crusades, the site was moved again because Abu Gosh was not close to the Roman road of the time.

The site of Al-Qubeibeh would appear to meet all the criteria: it is at the right distance and not far from the ruins of a Roman road of the time and, for this reason, in the 14th century the Franciscans settled there, also encouraged by the persistence of popular traditions and the particular topographical situation of the village.

Today’s celebration was divided into two parts: the celebration of the Eucharist in the morning and the vesper and adoration after lunch. The celebration, presided by the Father Custos, was attended by a large number of friars and sisters as well as local and international faithful resident in Jerusalem.

“This passage of the Gospel is very important for our lives as Christians,” said the Father Custos in his homily. “We also risk, like the disciples of Emmaus, being overwhelmed by the experiences of suffering and by death. We have to let the light of the scriptures and the light of Easter illuminate our lives and our crosses.”

Fr. Patton then spoke of the Eucharist, saying “here, today, during the Eucharist, on breaking bread, that bread will no longer be simple bread, but the body of Christ.”

“It is not just any bread, it is Christ who is present for us, who gives himself for us.”

After the homily, the small loaves that are offered to those present at the end of the celebration were blessed, a sign that refer to the Gospel passage and recalls the presence of Jesus.

An addition to the celebration was the blessing of the two wooden sculptures placed in the centre of the left nave of the church. Donated by a benefactress and carved by the artist Willy Messner, who comes from Val Gardena (Italy), they represent two moments of the Gospel passage to which the Shrine refers. In the first, there is Jesus who, walking, explains the Scriptures to the two disciples with their eyes closed, with one of the songs of Isaiah on the servant of Jahvè; in the second, the three figures are seated at a table and the disciples’ eyes are open, while Jesus, in the centre, breaks bread.

“We are still geographically isolated, for various reasons,” commented Fr. Bernard Thilagarajah, superior of the Convent and of the interobediential community of Emmaus. "But this year, the reduced re-opening has made us really happy. Many people accepted our invitation to stay and break bread with us, as the disciples did with Jesus. This is a great joy, in the hope that the joy and the number of pilgrims and faithful doubles and triples soon.” 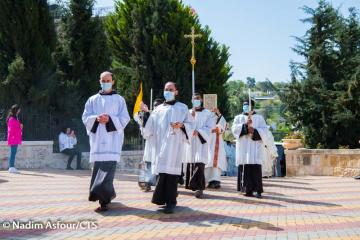 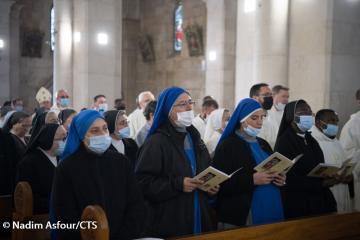 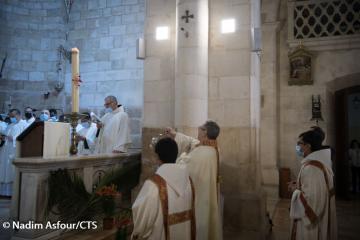 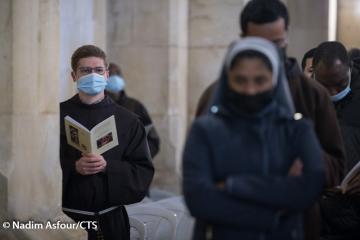 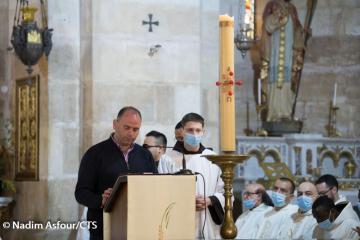 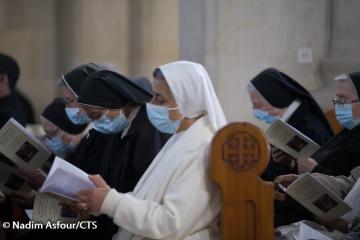 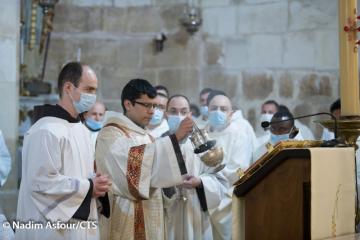 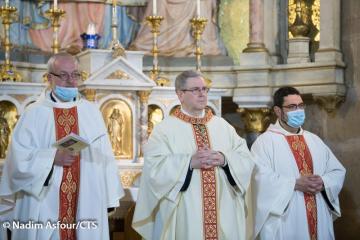 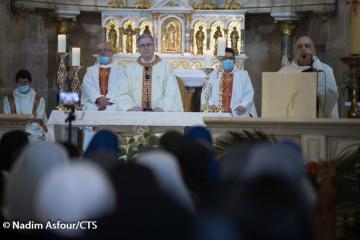 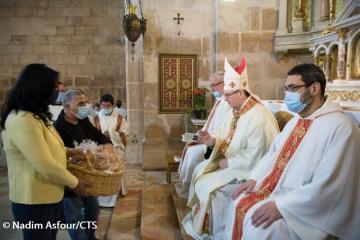 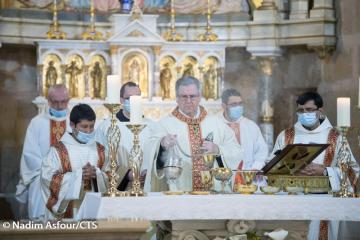 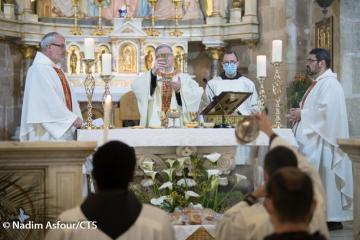 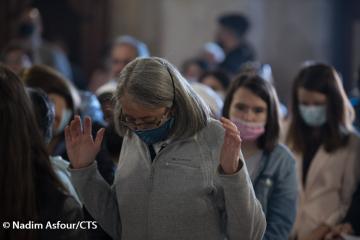 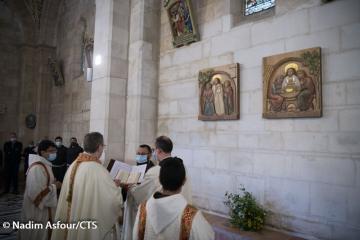 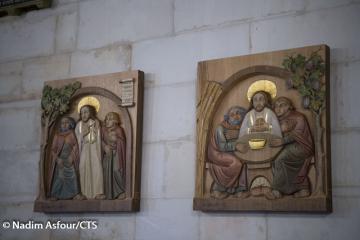 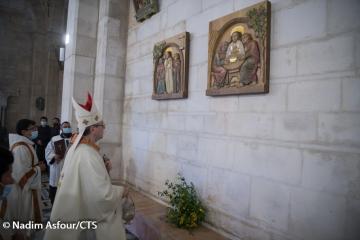 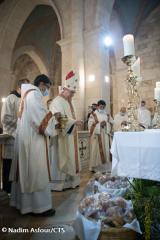 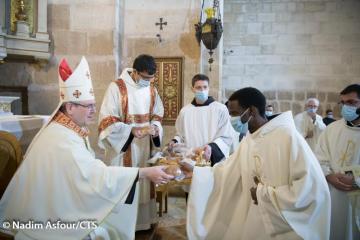 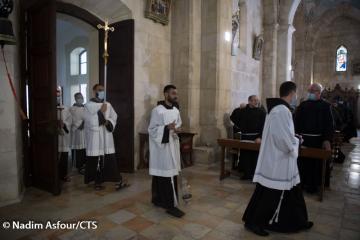 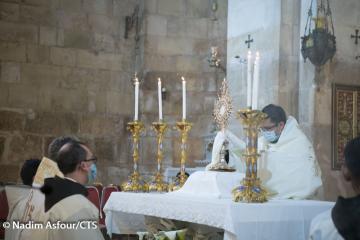 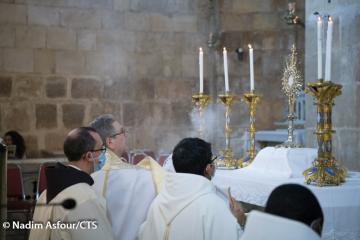 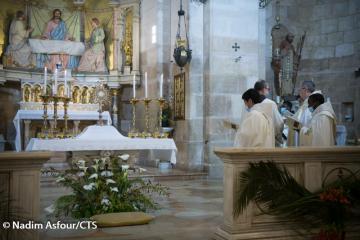 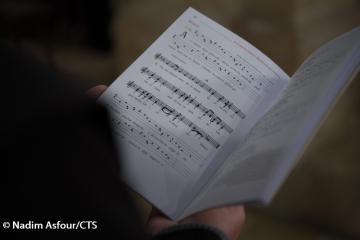 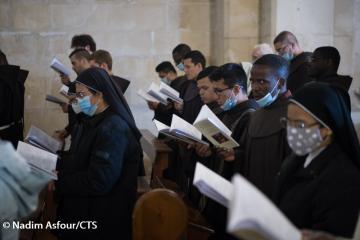 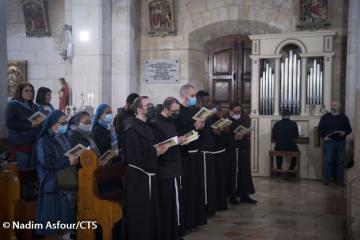 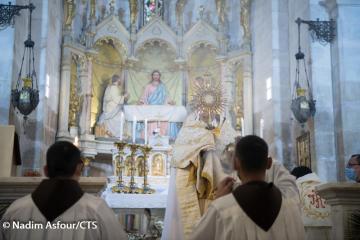 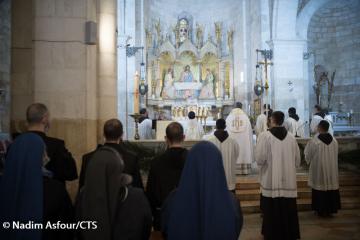