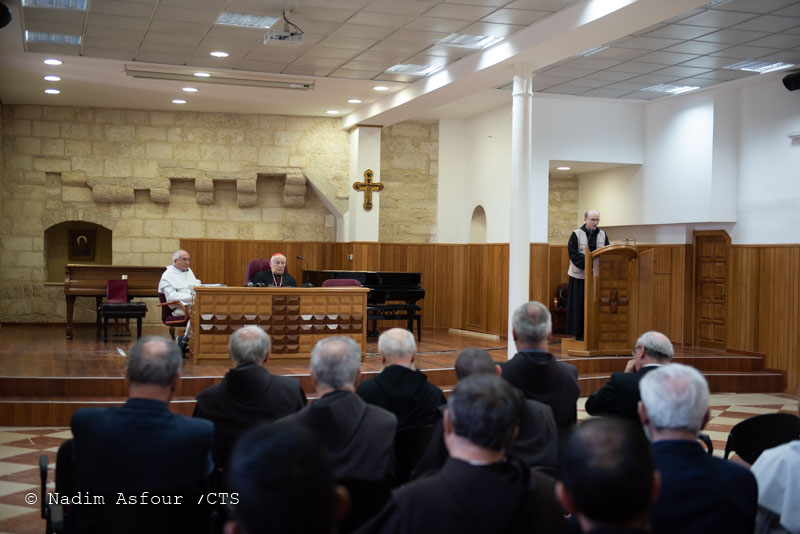 On 8th November, the feast day of Blessed Duns Scotus, the Dies Academicus was held in the Room of Our Lady of the Immaculate Conception, in the St. Saviour Convent in Jerusalem. For many years now, the event has marked the start of the Academic Year for the Studium Biblicum Franciscanum (SBF)and the École Biblique et Archéologique Française (EBAF), a day to confirm the collaboration between the two institutions.

The event was introduced by Fr. Rosario Pierri, dean of the SBF, who stated the reasons why this annual event is repeated over the years. "It is an academic occasion which acts as a hinge between two academic years: it is useful for presenting what has been done and for speaking about what will be done, with particular reference to publications and excavations." Fr. Pierri emphasized how it is difficult to find a programme similar to the courses of the Écoleand of the Studium anywhere else in the world. "Those who study in the Holy Land,” he said, “have the chance of a unique choice of courses and that’s not all: they have the chance to access library holdings which would enrich any course of study."

He was followed by the greetings and thanks of Father Jean-JaquesPérennès o.p., director of the EBAF, who emphasized his joy for the collaboration between the two institutions, hoping that this type of collaboration, that is not only academic but also amicable, can be enjoyed everywhere in the world.The Apostolic Nuncio of Israel and Apostolic Delegate of Jerusalem and in Palestine, Mons. Leopoldo Girelli, concluded the introduction. “The study of the Holy Scriptures and archaeological study,” Mons. Girelli said, “must represent not only a cultural enrichment but a personal experience of meeting Jesus," hoping that this path can reinforce fidelity to the Word of God.

The introduction was followed by a brief presentation on the figure of Fr. Michele Piccirillo, the archaeologist of the Custody of the Holy Land, on the tenth anniversary of his death. Fr. Giovanni Claudio Bottini, dean emeritus of the SBF started with "Greetings and Peace!” the words which Fr. Piccirillo usually used in greeting. "Countless writings and events,” he commented, “have recalled his person and his activity in these ten years,” quoting several works, places, books and cultural events which have revisited his work, always highlighting the value of his excavations.

The Cardinal Prefect Emeritus of the Congregation for Catholic Education, His Eminence Cardinal Zenon Grocholewski, invited to give the main address, spoke about the importance and characteristics of Biblical studies, lingering on the fundamental elements such as the Faith, integral hermeneutics, and the Teaching of the Church. It is Card. Grocholewski himself, as the Custodial Vicar Fr. Dobromir Jasztal highlighted, who must be recognized as having had the merit of raising the SBF to a Faculty of Biblical Theology and Archaeology. He was the one to sign the Decree on 4th September 2001. On that occasion, he was given three gifts: a relic of the Calvary, a medal in memory of the 800th anniversary of the Franciscan presence in the Holy Land and a mother-of-pearl image representing St Francis and the Sultan, introducing the centenary which will be celebrated next year.