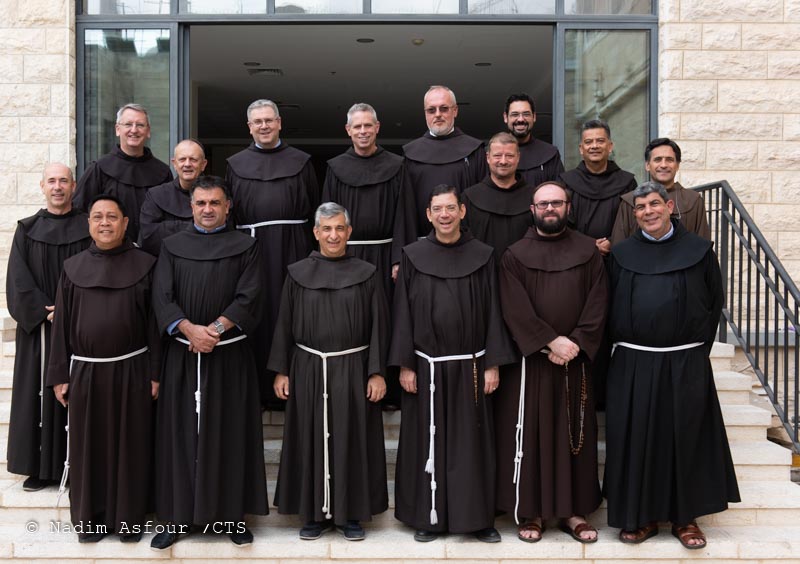 After a full week meetings, the visit of the Definitory General of the Order of Friars Minor has come to an end. Under the direction of Br. Michael Perry, Minister General of the Order, the friars of the Definitory had the opportunity to get to know the various fraternities present in the Holy Land, alternating between prayers and meetings with the friars, with visits to the holy places under the guidance of the friars of the Custody.

The Definitory General, which is composed of the Minister, his Vicar, and eight friars representing the different areas of the world, is a collegial body called upon to make decision on everything concerning the spiritual and temporal good of the Order of Friars Minor. “Every six years, we visit all of the conferences,” said Fr Michael Perry. “And this is an opportunity for us to visit the friars, to listen to them, to show them our closeness and I believe that this practice is very important for the Order but also for the Church.”

The first meeting, on Thursday, October 11, was with the Discretorium of the Holy Land, followed by one with the Jerusalem friars in formation, who reside at St. Savior’s Monastery and at the Monastery of Ein Karem. Friday opened with a mass at the Shepherds’ Field in Bethlehem, followed by a visit and a daily procession to the Grotto of the Nativity. During lunch with the Bethlehem community, the Definitory also met the young aspiring friars, that is, those who are spending the year before the postulancy in Jerusalem. The friars of the Definitory then visited the archaeological wing of the Terra Sancta Museum at the Monastery of the Flagellation in Jerusalem right before participating in the Via Crucis on the streets of Jerusalem.

Saturday, October 13, was dedicated to Galilee. In the morning after the visit to the Basilica of the Annunciation, the Minister General presided over the Angelus. In the afternoon, the friars of the Definitory walked in the footsteps of Jesus on the Lake of Galilee, where they ended the day by participating in the Festival of the Shrine of Capernaum, with the solemn Eucharistic celebration presided over by the Custos of the Holy Land, Fr. Francesco Patton. Sunday was dedicated to a meeting with the inter-obediential community of Emmaus Qubeibeh, followed by another afternoon meeting with the friars of the Custody. The last day began with the mass at the Shrine of the Holy Sepulcher and with a visit ending in Gethsemane and the Mount of Olives.

These were intense and profound moments which left time for personal reflection, explained the Minister General, Br. Michael Perry, “I believe we have come to welcome and accompany the friars residing here but also to welcome what the Lord wants to tell us, what the Lord wants to invite us to do at the service of the whole universal order.” For Br. Michael, these meetings are very important also for the Universal Church, which is engaged in the search for signs of hope and joy to keep saying that Christ is the center of our lives and of the life of the whole world. “Being here,” he said, “opens you up to the certainty that the true hidden gem are the Christians of this land: pearls of the Order, the Church and of all of humanity.”