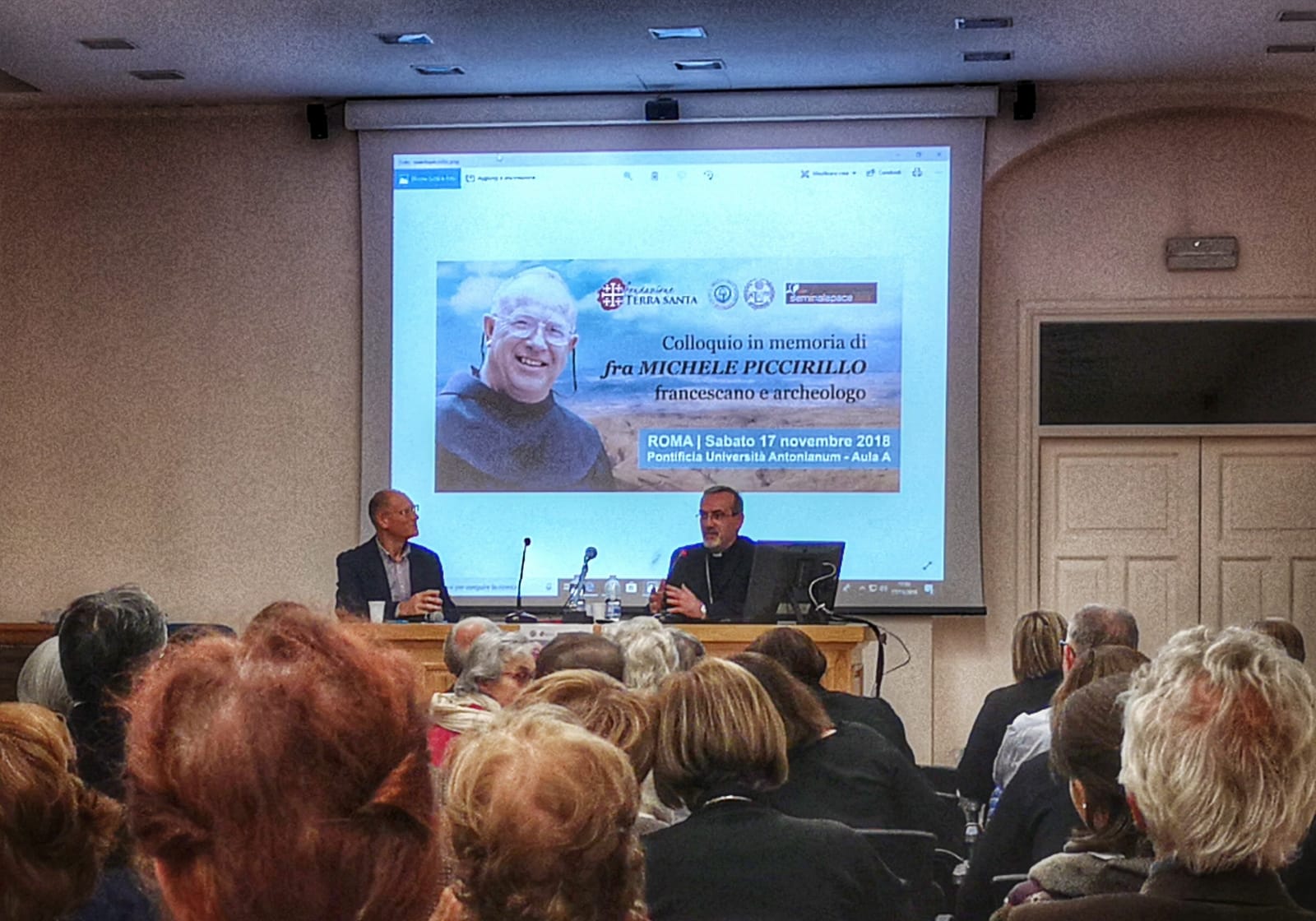 Ten years after the death of Fr. Michele Piccirillo, the Pontifical Antonianum University in Rome hosted a commemoration of the Custody’s great Franciscan friar and archaeologist. On November 17, scholars, friends and colleagues of Fr. Piccirillo recalled his tireless work as a scholar and his deep humanity.

The Custos of the Holy Land, Fr. Francesco Patton, sent a message for the occasion that was read in the hall. “The personal memory I have of Fr. Michele dates back to the 80s, when I was a theology student and lived at the Monastery of St. Bernardino in Trento.” The Father Custos met Piccirillo during a series of conferences. “It was there that I was able to personally grasp the passion that motivated Fr. Michele in his research,” said Fr. Patton.
“I would like to remind you that Michele was firstly a minor friar of the Custody of the Holy Land who was inspired by the dream of Francis of Assisi,” said the Custos. “And he was also a man with strong social sensitivity, capable of heading initiatives which, through culture, would also create jobs and help people live with dignity.”

Several speeches that from the morning until the late afternoon commemorated Fr. Michele Piccirillo: from Br. Agustín Hernández Vidales, OFM, the vice-rector of the Pontifical Antonianum University, to Br. G. Claudio Bottini, OFM, the dean emeritus of the Studium Biblicum Franciscanum, to architect Claudio Cimino, the former director of the school for mosaic restoration in Madaba, to Prof. Basema Hamarneh, an archaeology professor from the University of Vienna. Some aspects Fr. Piccirillo’s studies were remembered by Dr. Alessandra Acconci from the superintendency in Rome, while Prof. Luigi Marino, a restoration professor, spoke about [his work on] Mount Nebo.

Among the speakers, Prof. Chiara Sanmorì, from the pontifical theological faculty in Southern Italy, was Prof. Bartolomeo Pirone, a former professor at the University of Naples, known as “l'Orientale,” who gave his personal recollection of Piccirillo. Prof. Danilo Mazzoleni, the rector of the pontifical institute of Christian archeology (PIAC), Prof. Giorgio Ortolani, a professor of architectural history at the university of Roma Tre, Dr. Francesco M. Benedettucci, archaeologist and director of the mashhad excavations, Dr. Carla Benelli, from the ATS Pro Terra Santa, the curator of the Terra Sancta Museum, Prof. Leah Di Segni, a former professor of archaeology at the Hebrew University of Jerusalem and finally Dr. Francesco Di Nitto, a diplomatic advisor and friend of Fr. Piccirillo’s.

“I met Michele in 1990 when I arrived in the Holy Land,” said Mons. Pierbattista Pizzaballa, who arrived unexpectedly during the day and who spoke at the end of the conferences. I remember that he was a hard worker; he traveled a lot and when he was at home he knew why he worked so hard and he also encouraged others to work,” he said with a smile. “But he was also very kind and thanked people. He was my professor and I was aware that I was with a great person, a man of science.” Mons. Pizzaballa talked about the unpublished episodes from his life, like when, as an avid reader, he would let him borrow novels and then discuss them with him. “Fr. Piccirillo, who was a great friar, whom everybody spoke about, on Sundays would process to the Holy Sepulcher along with everybody else,” said Pizzaballa. “I believe that Fr. Michael will have no heirs: he was unique. But his passion I hope will carry on.”