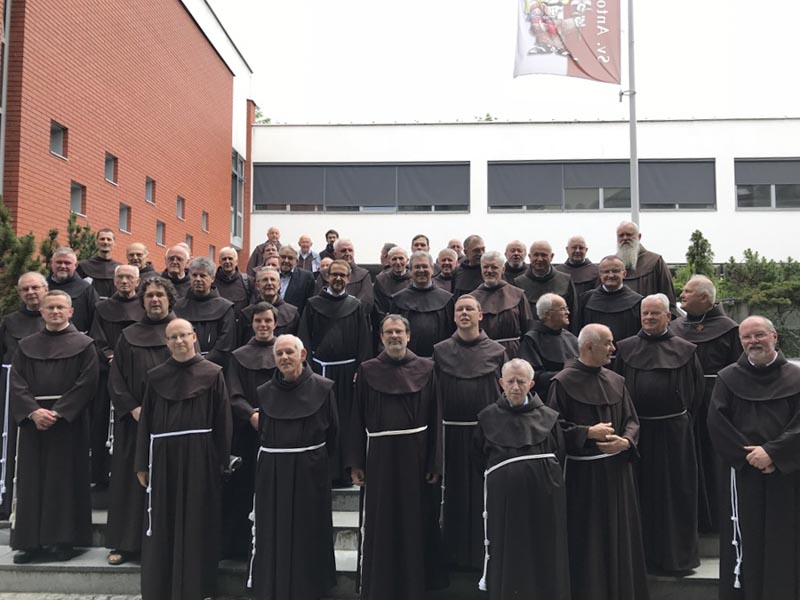 On May 30, during the feast of the Province, he met the brothers of the Franciscan Province of the Holy Cross. The meeting was held at the Monastery of Vič, and it was attended by Provincial Minister, Br. Marjan Čuden with his Definitory and many friars of the Province. Also in attendance was the archbishop of Ljubljana, Mons. Stanislav Zore, OFM. The Custos discussed the life of Christians in the Holy Land and the mission of the friars of the Custody; he described the tasks of the Commissariat and of the Commissaries of the Holy Land and answered the friars’ many questions.

At the end of the meeting, as a gift to remember his visit to Slovenia, the Provincial Minister gave the Custos a copy of the miraculous image of Maria Pomagaj, the Virgin of Help, who is venerated in the Shrine of Brezje. In turn, the Custos paid homage to the medal minted for the 800-year anniversary of the Franciscan presence in the Holy Land to the Bishop, the Provincial Minister and the Commissioner of the Holy Land.

During his visit to Slovenia, Br. Francesco Patton was a guest at the Monastery of Brezje, where the Guardian, Br. Robert Bahčičgli, presented the story of the Slovenian Marian National Shrine of Maria Pomagaj. Br. Robert then led a visit to the Museum of Creches, which was set up at the monastery to highlight the local tradition of the creche that is also common in various countries of the world.

On the evening of May 30, the Custos also met a local group of Friends of the Holy Land and Knights and Ladies of the Holy Sepulcher. In a brief conference, he made a presentation about the history of the Franciscan presence in the Holy Land and the Custody’s role. The presentations were followed by the questions asked by those present, who were particularly interested in the current situation, in the commitment to the Shrines and in the Custody’s pastoral and social works.