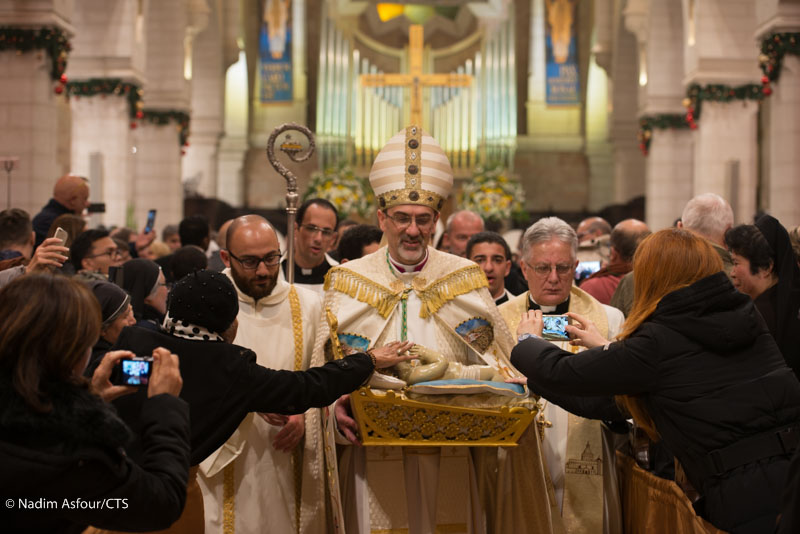 Midnight. A song plays in the crowded Church of St. Catherine in Bethlehem: Gloria in excelsis Deo. And the organ music is powerful, while the festive bells ring, and the crowd rises to its feet. Christmas is here.

The Apostolic Administrator of the Latin Patriarchate, Fr. Pierbattista Pizzaballa, was the first to pronounce the word “gloria.” He also celebrated Midnight Mass on December 24 at the place where it all began. A small statue of Jesus was on the altar to remember the presence of the little child, who was poor, whom no one wanted to accept and who was born in a stable in Bethlehem.

“In the aftermath of the Jubilee Year of Mercy, we can see Christmas as the door that God keeps open so as to reach out to man and invite him to enter into communion with him,” said Pizzaballa in his homily. “We are afraid of what is happening in the world, with our hopes that here, as in too many countries around the world, which are shipwrecked in the midst of corruption, the empire of money, sectarian violence and fear, “Pizzaballa said, referring to current events in Syria, Iraq, Egypt and Jordan. “But also in our Holy Land, the thirst for justice and dignity, truth and true love continue to rise.” What is the answer to all of this? “You are our hope; we will not be discouraged,” he concluded. After the end of the celebration, there was a procession to the Grotto of the Nativity. Palestinian Authority President Mahmoud Abbas, as well as ministers, ambassadors, consuls and diplomats, sat in the front row.

December 24 began early in the morning as a day of celebration and prayer for the Christian community. Mons. Pierbattista Pizzaballa kicked off the day at 11:15 a.m. at the headquarters of the Latin Patriarchate with his traditional Christmas greetings, for which the son of the Moukhtar, the head of the Latin community in Jerusalem, read a speech on behalf of his father. Then began the procession of cars to Bethlehem. Their first stop was at Mar Elias, then at Rachel's Tomb and finally, in a short last-minute stop, Pizzaballa exited the car to greet a group of Palestinians who were waiting for him with banners and pictures outside of a refugee camp at the entrance of Bethlehem. Once the procession arrived at Manger Square, in front of the Church of the Nativity, Pizzaballa made his solemn entry, preceded by scouts in uniforms with marching drums. At St. Catherine’s Church Christmas prayers with First Vespers began at 2:00 p.m. and the first procession to the Holy Grotto was at 4:00 p.m.

The Custos of the Holy Land, Fr. Francesco Patton, standing outside the Church, blessed the crib that had been placed there, which was donated by the Autonomous Province of Trento to Pope Francis last year and which was then re-gifted by the Pope to Bethlehem. “The blessing of the crib has the meaning of accepting this gift, and to always accept the mystery that this gift represents: the incarnation of our Lord Jesus Christ,” said Fr. Patton. A delegation from the Trentino Alto Adige region of Italy, where Tesaro, the town where the crèche statues were made, is located, and which is also where the “Cimatosa” choir, who sang Christmas carols in front of the statues of the Holy Family, is from. Thirty singers, Italians of various ages, harmonized the songs a cappella.

Many pilgrims and tourists came from Italy, but at Manger Square in Bethlehem on Christmas Eve all of the languages of the world could be heard. To each person, Christmas inspired something different. “Christmas is being with the people you love and it means celebrating all together,” said Liza, who came with her parents from Austria. “It is a family holiday,” echoed her mother, Elizabeth. Sira, Dima and Nura are Muslim, yet they were there in the streets [of Bethlehem] to soak up the atmosphere: “Christmas is a pleasant feast. We really like it.” Sara, who is Peruvian, said: “I am a Christian, and I love Jesus, and many years have passed since he was born. It is fantastic that I can experience history and be where he was.”

“I live in Osaka, Japan, and there Christmas is different. I'm happy to be here,” said Take. Mohammed and Doha, a couple from Hebron, pointing out the Christmas tree to little son Adam, said, “We are proud to be in this same place for this feast, Christians and Muslims alike, all together as part of the same society.”

The Custody of the Holy Land celebrates St Francis of Assisi