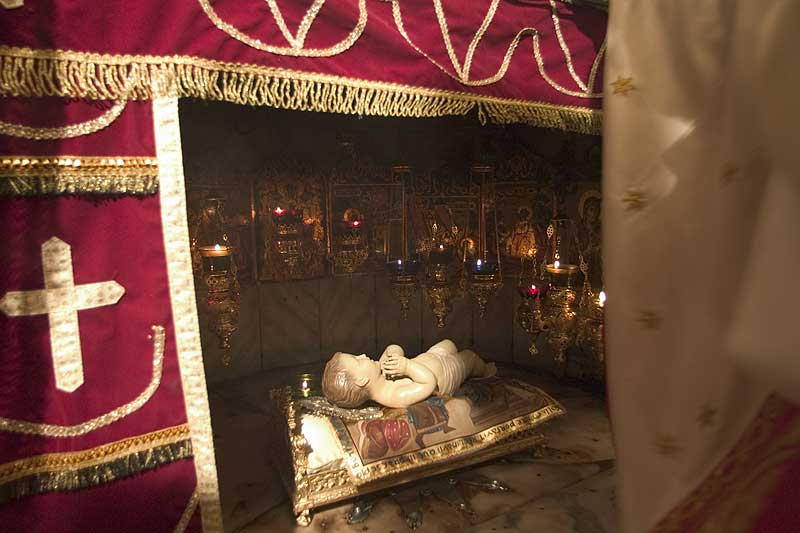 Christmas was celebrated this year with the solemnity which befits it in the same town in which the divine Child was born more than two thousand years ago.
According to a rigid ritual fixed by the rules of the status quo of those Holy Land sanctuaries officiated by various Christian Churches, the celebrations opened with the solemn entry of His Beatitude Mgr. Michel Sabbah, Latin Patriarch of Jerusalem, in the Basilica of the Nativity in Bethlehem. Around two in the afternoon, under an overcast sky menacing blustery showers, the Franciscan friars who are the custodians of this holy place, welcomed the Patriarch in Manger square, in front of the centuries-old Basilica.

At the door of the same church, the Guardian of the Franciscans, Fr. Justo Artaraz, waited for the Patriarch and welcomed him according to the prescribed rites. After his entry into the Basilica of the Nativity, the Patriarch moved on into the Franciscan parish church of Saint Catherine, where he put on his liturgical cope for the celebration of the First Vespers of Christmas. At the end of Vespers the Patriarch led the Procession to the Nativity Grotto. The Franciscans conduct this procession on a daily basis, but on the occasion of the Christmas celebrations it is held with particular solemnity. The climax of the celebrations was the vigil ceremony during the night. The Patriarch, flanked by Mgr. Fuad Twal, Bishop Coadiutor, and by Mgr. Kamal Bathish, Auxiliary Bishop of Jerusalem, presided the singing of the Office of Readings, and immediately afterwards celebrated the solemn midnight Mass of the Nativity.

The long celebration ended with a new Procession to the holy Grotto, in which the Patriarch placed a statue of the Infant Jesus. At the very same place the Nativity Gospel by Saint Luke was sung by the Deacon Fr. Cesar J. Roman, who also re-enacted the Nativity scene as it is narrated by the Evangelist, wrapping the statue of the Child Jesus with swaddling clothes on the silver star which marks the spot of the birth of Christ, and placing it in the manger, which is nowadays an altar officiated by the Latins.

The singing of the Mass was led by the Terra Sancta Choral society, directed by Ms. Hania Sabbara, and accompanied on the organ by the pianist Ms. Margherita Guerra and by Fr. Armando Pierucci, a Franciscan musician who for the occasion composed a new Mass for 4 voices, with parts for poliphony and others for the participation of the faithful.
The liturgical service of the various celebrations was accomplished in a dignified manner by the students of the Francsican Student house of Saint Saviour, who came over from Jerusalem for the occasion.

At the same time various groups were celebrating Christmas at the Shepherds Field in Beit Sahur, below the town of Bethlehem. The Roumanian Catholic community celebrated a Eucharist in the church of Saint Catherine at three in the morning.
On Christmas day the Patriarch celebrated the Eucharist in which the local Christians of Bethlehem took part. This was followed by various celebrations in different languages. During the afternoon the Franciscan community organized a pilgrimage to the Shepherds Field sanctuaries, belonging to the Greek Orthodox Church and to the Francsican Custody. Great numbers of pilgrims participated just like past years, in spite of a very cold and blustery night. A group of foreigners resident in Jaffa also came to Bethlehem for the occasion.