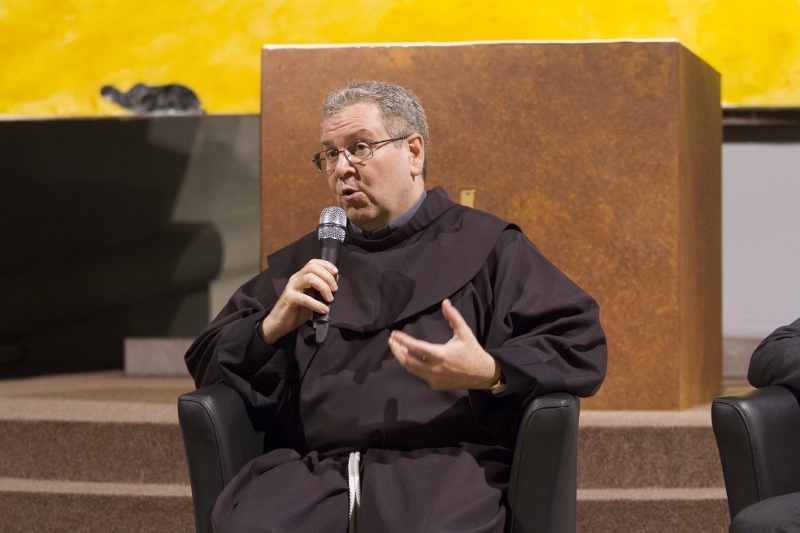 “Christians in the Holy Land: the challenge building peace day by day:” this was the main theme of the meeting that took place on May 9 at parish church of Longuelo (Bergamo, northern Italy). Fr. Francesco Patton, the Custos of the Holy Land, spoke with Mons. Francesco Beschi, the bishop of Bergamo, along with the participation of Fr. Fabrizio Rigamonti, director of the Office for the Cultural Ministry and the Cultural Heritage Office of the Diocese of Bergamo. The event took place within the “Bergamo Festival - Making Peace,” which took place on May 3-13, 2018, with the theme of “Reconciliation: renewing threads in societies experiencing conflict.”

The Custos explained there are about 170,000 Christians in the Holy Land, or 2 percent of the population and that from 1948 to today their presence has decreased steadily: 70 years ago, one in five residents of the State of Israel was a Christian. “It is a small presence, but it wishes to be a sign of hope and of peace-building,” as Fr. Patton has repeatedly pointed out. It is a presence that has been put to the test in everyday life, such as in Syria, where the Christian communities in recent years have gone from a population of about 300,000 to 30,000. Yet even there, dialogue is always open in everyday life.

To Mons. Beschi’s question regarding the lack of peace in the Middle East compared to the West, Fr. Patton replied that the theme of peace has always been at the heart of the Custody’s mission, from the beginning to the worst days, citing the example of the war in Lebanon, in Iraq and now in Syria.

One of the main hardships today is the wall, the separation barrier that divides the State of Israel from the Palestinian territories. We must try to overcome the wall by allowing people to come together and get to know the different realities of this land: Christian, Muslim and Jewish. For example: in Jericho, at the Franciscan school, whose student population is 90 percent Muslim, the Custody is making small steps so that these two worlds can meet again. Also, in Emmaus where the local community, with only one Christian family, has asked for help building a kindergarten.

Reconciliation begins when one begins to come together once again, creating relationships to support creative entities, such as the Magnificat, the Custody’s Music School, which is open to all confessions. This also applies to the respect between the different religions, allowing others to express their own devotion in prayer.

Guarding the Holy Places, as the Custody does, also means taking care of people. Because around the Holy Places there is almost always also a small Christian community, which needs to be supported in order for them to live out their faith.
“However, our presence is and remains, a minority presence,” said Fr. Patton , “which requires us to be aware of our condition and to be dedicated to serving the Christian minority.”
Theirs is a presence that has never lost the meaning of this strong link between the Holy Places and the Christians who live and work in those places.