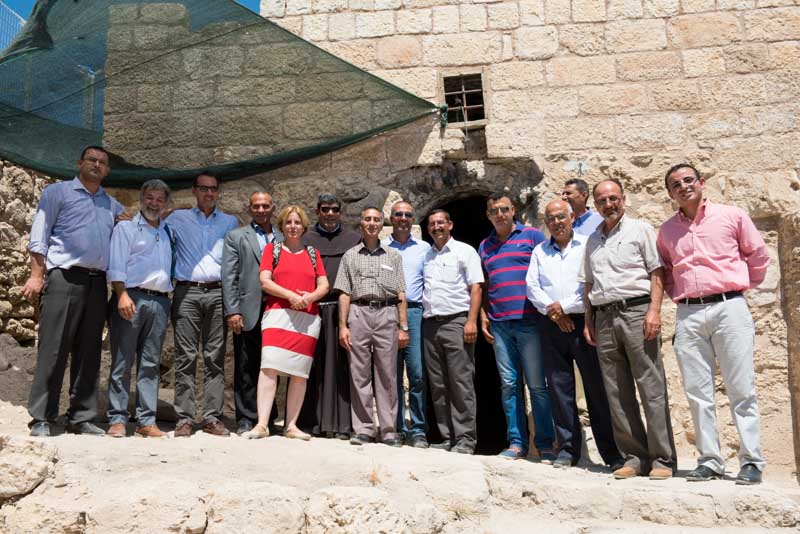 On Wednesday, September 2, a very special ceremony was held at the Franciscan monastery in Bethany, also known as al-Azariya, in Arabic. The ceremony was intended to celebrate the end of the second phase of excavations near Lazarus’ tomb and the positive collaboration between the various parties involved.

In effect, the project required various types of participation that was academic, material and administrative in nature. The archaeological site covers three properties belonging to the Franciscans, the Greek Orthodox and the Muslims. This is why such importance was given to dialogue between the different communities. The ambitious project that took place on Franciscan property, also allowed Palestinian archaeology students to gain practical experience in their field of study.

Among those present at the ceremony were the Custody’s Bursar, Fra Ibrahim Faltas OFM, representatives of Al-Quds University and the Ministry of Tourism and Antiquities, the mayor of al-Azariya, and the Director of the Pro Terra Sancta Association, Tommaso Saltini. Fra Michael Sarquah OFM, the guardian of the monastery, and several friars from the Studium Biblicum Franciscanum, were seated in the first row, and with them was Fra Eugenio Alliata OFM, who has been closely following the excavations.

“Man does not live on bread and water alone,” recalled archaeologist Osama Hamdan. Since Bethany is the third most visited place in Palestine by tourists, the excavations also are of great value for the local population. “This work is intimately linked to a sense of belonging, said Fra Ibrahim Faltas. The Palestinian students who participated in the excavations are learning more about the history of where they live. This also allows them to reaffirm their hope for the future. While addressing them, the friar added: “You write history by discovering it with your own hands. You are uncovering a source of national heritage.”

“The sense of belonging,” concluded university Vice President Hanna Abdel Nour goes along with knowledge, know-how and their dissemination. These things are essential for conserving our national heritage.” This conservation is everyone's responsibility: this was at the heart of the speakers’ message.

The Byzantine and Crusader times are the most important periods for the city. Four churches were built near Lazarus’ tomb. The first dates back to the time of St. Helen in the fourth century. The last, which is above St. Lazarus’ tomb, dates back to the time of Queen Melisende in the twelfth century. Beside it was a monastery and a tower that was used to protect religious and pilgrims. Excavations at the site have allowed for a stratigraphic analysis of the city to be drawn up, revealing vestiges from the Byzantine, Muslim, Crusader and Ottoman time periods. The excavations are still only at their inception but already a canal and a Crusader-era water tank have been found. Also, a wall was uncovered that shows the existence of two rooms whose use is still unknown.

While the project’s design is large in scale and while it has considerable potential, it remains relatively modest in its field work due to lack of funds. “The first year, this area was a neglected waste site. We can still see traces of illegal excavations, explained archaeologist Ibrahim Abu Amr. So, we have gone to great lengths to care for it. The preliminary archaeological work was completed this year. The project aims to provide practical experience for students of archaeology, while discovering the richness of the site, and while making it accessible to tourists.”