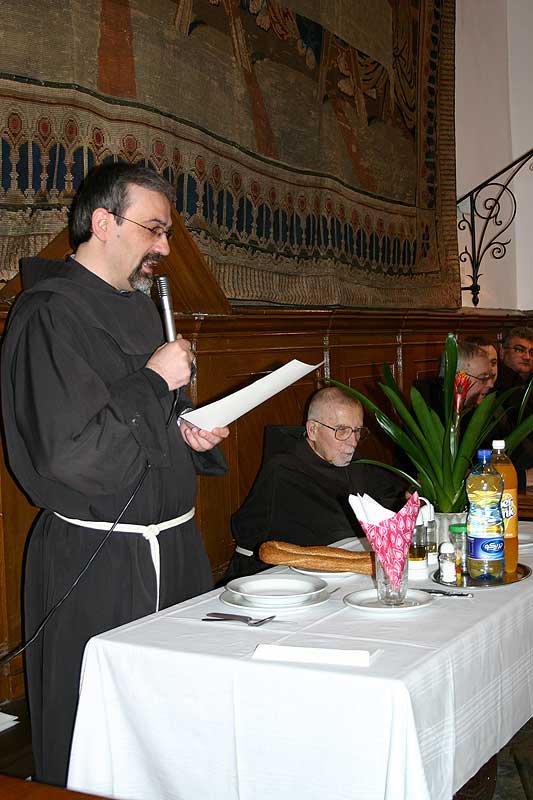 On the sixth of February, memory of the Japanese martyrs Saints Pierbattista Pizzaballa, Paul Miki and companions, the fraternity at the San Salvatore convent celebrated the name day of Fra Custos as well as that of Fra Armando Pierucci, organist of the Custody. The Eucharist started around midday and was presided over by Fra Custos himself, with the participation of numerous concelebrants and faithful. In the homily Fra Pizzaballa highlighted the value of the cross in the difficult moments in life, taking as an example his patron saint who donated his life for Christ. He also underlined the sentence in the Gospel, “I am with you alway, unto the end of the world.” Since we are often tempted to complain about a presumed absence of Christ, our faith should help us to remember and keep in mind His promise to always accompany us on our journey.

At the end of the Eucharist, Fr Custos expressed all his sincere gratitude for the presence of so many friends as well as for the support of their prayers in his difficult task.

Then all moved into the refectory for a fraternal meal. After the benediction Fra Guardian Jerzy Kraj said a few words of homage to Fra Pierbattista Pizzaballa and Fra Armando.

Besides, taking advantage of the festivity, the fraternity wished to express affectionate appreciation and much gratitude to Fra Vincente Grzyska, on the eve of his return to his Province, for 18 years spent in the service of the Custody.

Fra Pizzaballa joined in the thank you for the prolonged presence of Fra Vincente at the Mount Tabor Sanctuary by reading the farewell letter.