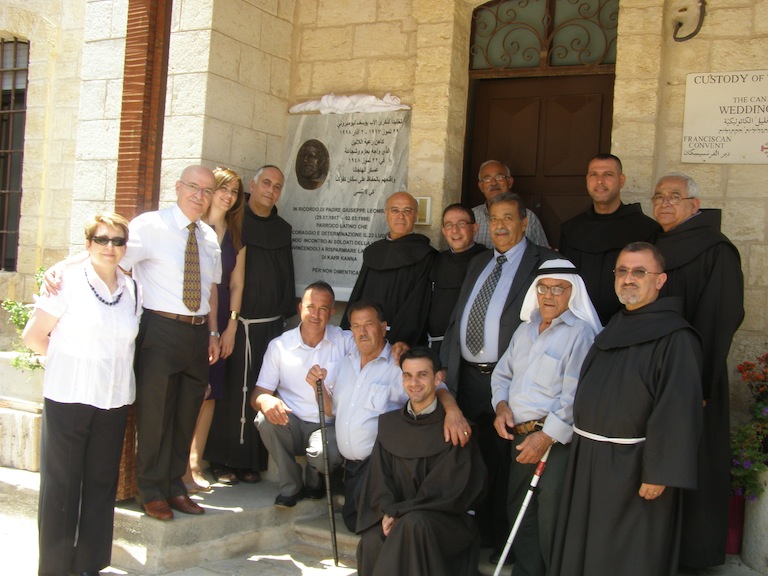 The stone dedicated to Father Giuseppe Leombruni, “the Latin parish priest who with courage and determination,” it says in Italian and Arabic, “went to meet the soldiers of the Haganah on 22nd July 1948, convincing them to spare the population of Kafr Kanna", was inaugurated on Sunday 5th June in Cana.

It was Father Michele Piccirillo, shortly before he passed away, who dictated the inscription and commissioned the sculptor Vincenzo Bianchi to reproduce in bas-relief the portrait of Brother Leombruni.

The Franciscan commemorated in Kafr Kanna, Cana, was born in Ferentino in 1917 and was only 11 years old when he arrived in the Holy Land. Baptized with the name of Luigi, he became Brother Giuseppe in 1934, then a priest in 1942, in the middle of the Second World War.

The episode commemorated by the stone in his memory dates back to the months immediatekly following the division of Palestine between Arabs and Jews and the proclamation fo the State of Israel, corresponding to the first of the Arab-Israeli wars. In July 1948, it was listening to Father Leombruni’s advice that the inhabitants of Cana decided not to flee, as the army approached, avoiding exile and saved thanks to the courage of the friar who went to speak to the Israeli soldiers, explaining that the population did not intend to oppose any resistance.

“The Custody will not forget what you did in Cana, and if Cana is still Christian then it is thanks to you, your abnegation and at the risk of your life,” the then Father Custos, Brother Erminio Roncari, wrote to Leombruni in 1972.
The same thanks were pronounced on Sunday on the presentation of the stone, inaugurated after the Mass presided by Father Amjad Sabbara.

Mrs. Teresa Basha was present on behalf of the Italian Embassy, whilst Father Quirico Calella passed on the greetings and thanks of Brother Leombruni’s family, underlining how, in 1948, in many other towns - Acre, Mujedel, Tiberias, Nazareth, Ramle, Jaffa, Ain Karem – the Franciscans worked on behalf on the population.
In addition to the community of Cana, the Superior of Mount Tabor, Brother Mario Hatshiti and Brother Jak Karam, in charge of Mujedel, were also present at the ceremony.