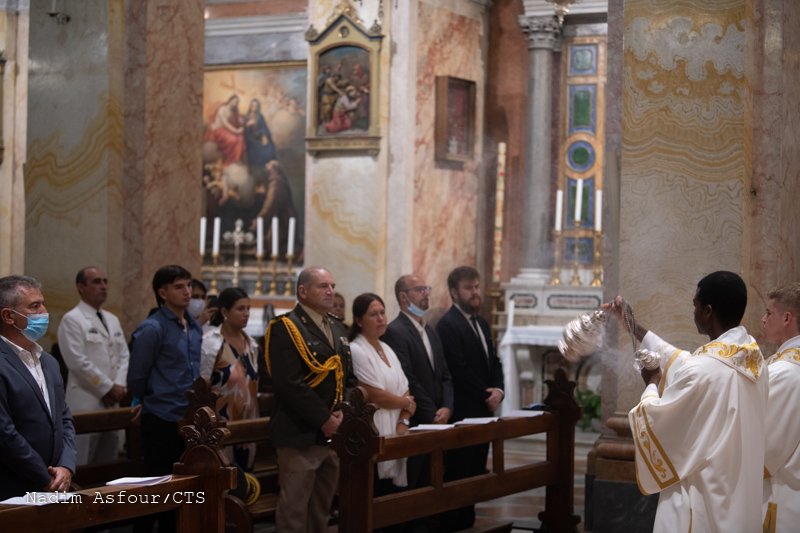 On Saturday 4 September 2021, with a Holy Mass presided by the Custos Fr. Francesco Patton, the Custody of the Holy Land joined in the great joy of Piedra Blanca (Argentina) where, a few hours later, the beatification of Fr. Mamerto Esquiú, friar minor, man of God and preacher, was celebrated.

The celebration in Jerusalem

At St Saviour’s church in Jerusalem, a Eucharistic celebration took place on the Saturday morning in Spanish, in the presence of the Ambassador and of the Consul of the Republic of Argentina and of other authorities of the diplomatic representation. It was also here, in the convent of the Old City of Jerusalem, that the Blessed had stayed, from 26 June 1876 to 8 December 1877, during his pilgrimage in the Holy Land, which he had started to “escape” his probable episcopal nomination to the diocese of Buenos Aires. It is here that there is a plaque in his memory and various registers of the masses for the intentions of the lay friars signed by the Blessed, as well as the wooden statue by Francesco Sella which represents the Immaculate Heart of Mary, before which – as he himself relates in his diaries - the Blessed would pray.

"When he saw the domes and the walls of Jerusalem, he stopped the carriage he was travelling in,” the Custos of the Holy land recounts during the homily. “He alighted and kissed the ground and let himself be surprised by the stupor of the mystery of mercy that God showed here for us, sinners.

The pilgrimage by Fra Mamerto in the Holy Land helps us understand the quality of his person, his life and his vocation. The words that the then Minister General of our Order, Fr. Bernardino da Portogruaro, wrote about him, help us understand the quality of the person, of the life and of the vocation of Fra Mamerto: a genuine friar minor and man of God, an extraordinary effective preacher, a precious man for the good of his country, Argentina."

During the year and a half he stayed in the Holy Land, the individual vocation of the Blessed Mamertois clear he is a friar minor and a man of God. AS his memoirs recount, the Blessed saw with amazement and prayer and lived with mystical intensity the prayer to the Holy Spirit at the Holy Spirit, the celebration in Bethlehem and the contemplation of the Sea of Galilee, where he perceived the presence of Jesus in particular "In the second place, the life and pilgrimage of Fra Mamerto introduce us to him as an extraordinarily effective preacher" continued Fr. Patton on his homily. This ability of his was also recognized in the Holy Land when, on the evening of Good Friday, he preached before Spanish pilgrims with open arms before the gate of the Holy Sepulchre. "Tears ran down from his eyes and streaked his cheeks in remembering the passion and death of the Lord Jesus,” related the Custos. "In the same way, emotion and tears flooded out from the hearts and eyes of the pilgrims filling the square."

His ability of peaching was also shown in Argentina when, in 1853,he helped his people understand the value of national unity represented by the Constitution, an element necessary to unite the citizens in an ideal of peace and coexistence.

"Today Fr. Mamerto is proclaimed Blessed and proposed as a model of Christian life and intercessor for the whole Church,” concluded the Custos of the Holy Land. "Let us look at him as a model of a friar minor, as a witness of the Gospel, but also of his authentic civil commitment. And we ask for his intercession, for the whole of the Church and for his country, Argentina, but also for this Holy Land and for all its inhabitants, for this Holy City where he left his heart, and also for us, friars of the Custody,”

Blessed Esquiú and the Holy Land

Fr. Mamerto Esquiú was born on 11 May 1826 in Piedra Blanca, Catamarca (Argentina). He was born with a severe illness from which he soon recovered so that, as per his mother’s vow, he wore the habit of St Francis for a while as a child. After entering a convent, from 1841 to 1849 he devoted himself to the Franciscan formation with the province of the Assumption in Argentina.

After he celebrated his first Mass on 5 May 1849, he asked for and was granted permission to leave as a missionary for Bolivia where he wanted to lead a hidden and austere life. In 1870 he was proposed for the episcopal see of the city of Buenos Aires, but his humility led him to considering himself unworthy of such a task, so he decided to leave the country and go on a pilgrimage to the Holy Land, Rome and Assisi.

Few documents give any account of the passage of the Blessed in the Holy Land, The first is the letter that the then Minister General Fr. Bernardino da Portogruaro send to the Custos of the Holy Land Fr. Gaudenzio da Matelica on 7 June 1876, informing him of the arrival of the friar in Jerusalem: it is precisely in this letterthat we can read of the episcopal proposal, from which the Blessed was fleeing. Another testimony is given by the register of the Masses of St Saviour, where we can clearly read the signature of the Blessed, who used to celebrate masses for the intentions of the lay brothers.

His "Diario de recuerdos" allows learning more about his life in the Holy Land and the aspects that remained impressed on the friar’s heart. As he himself writes in his diary, his pilgrimage was impregnated by prayer but also humble daily tasks in the shrines where he stayed.

Many years later, after he had returned to Argentina and been consecrated Bishop of Cordoba, the friar wrote again of Jerusalem dedicating words of love to it: "Hundreds of times I walked through your streets, from the site of the ancient Aelia to the bottom of the Vey of Josaphat; many times I contemplated you from the top of Mount Olive as well as from the place where all your conquerors  camped; I went around your walls, I looked at your domes and crenellations from afar, I penetrated into your dark necropolises; for a year and a half I breathed your air and contemplated your days and your nights; your burning sun and your melancholic moon and always and everywhere I saw nothing but the city of God, oppressed by human ingratitude; I never perceived anger in you, but sighs of the finest and most desolate of creatures. Jerusalem, I would so much have loved to end my days in the sad and solemn shadows of your ruins, but the Lord, your King, did not want this and I had to return to where I have been honoured without any merit. I ask God that he my grant me the priceless good of allowing me to take part in your fate, which is the fate of all the saints: to be noble and desolate, as you are, o beloved Jerusalem!” 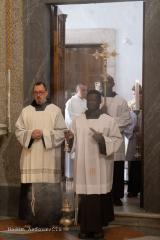 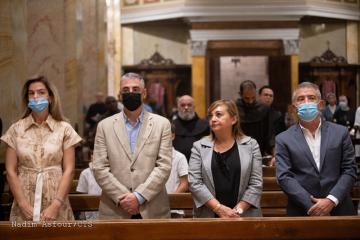 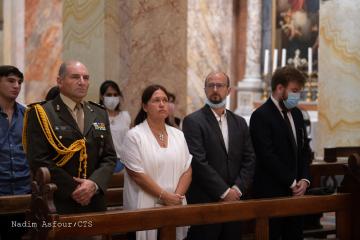 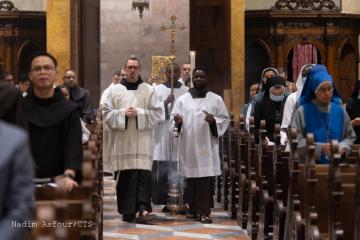 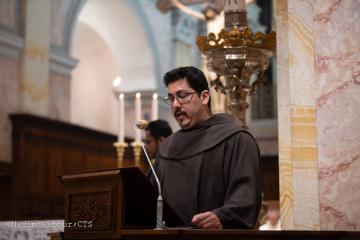 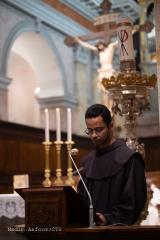 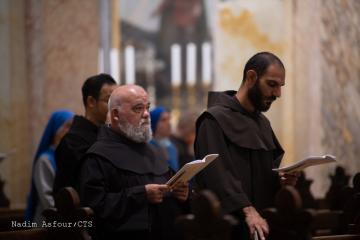 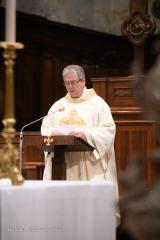 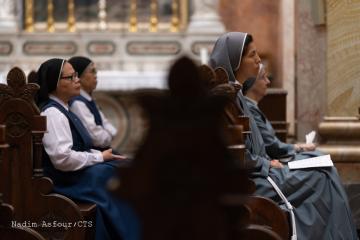 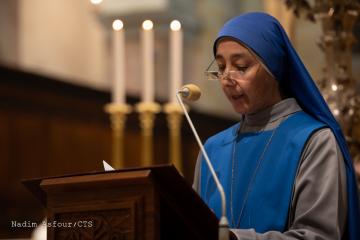 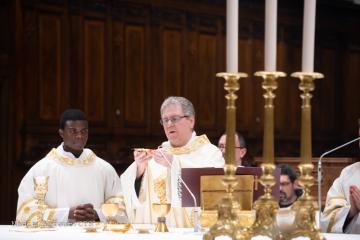 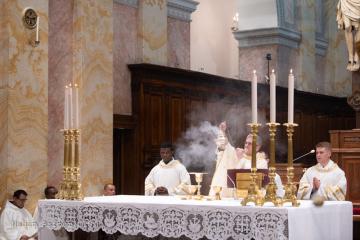 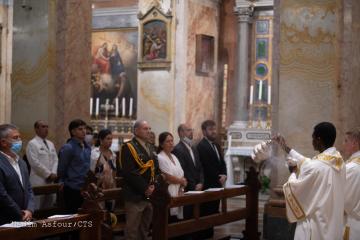 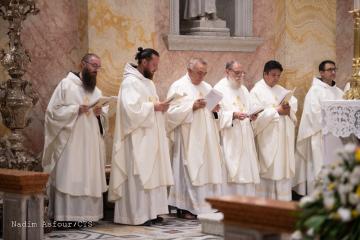 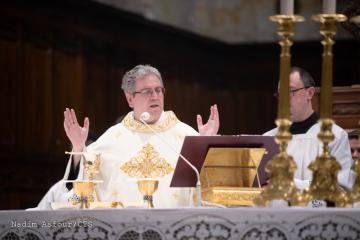 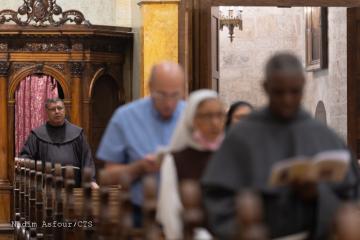 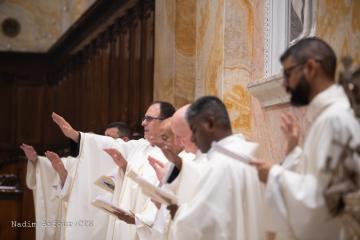 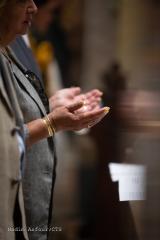 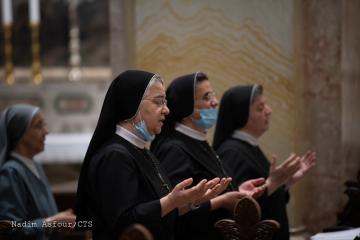 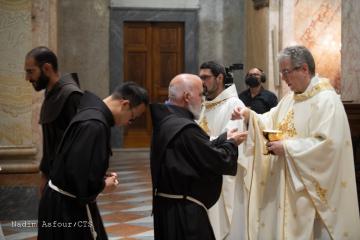 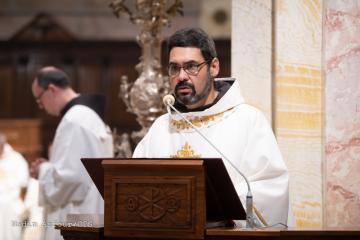 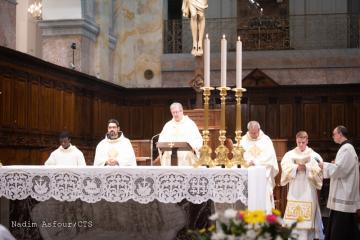 The celebration in honour of the Kingdom of Belgium

The Seventh Franciscan March in Syria

The celebration in honour of the Kingdom of Belgium

Jerusalem: the Dar al-Consul complex shines once again in the Old City