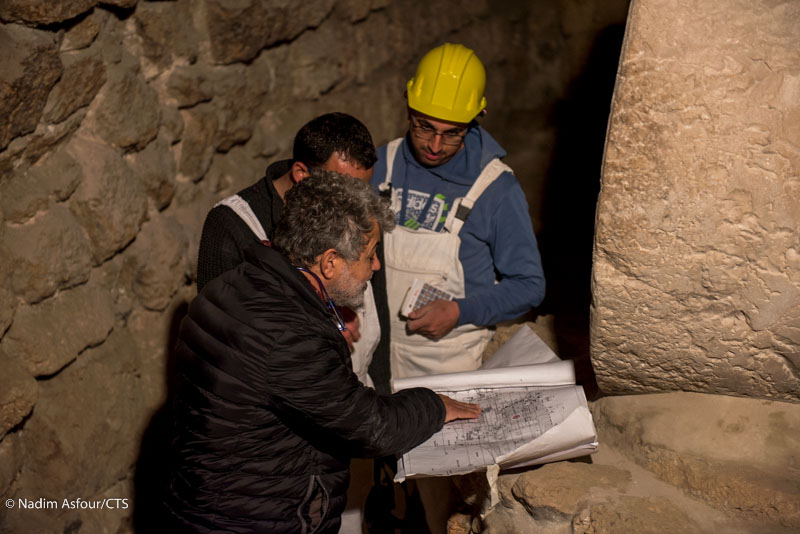 With dust on his shoes, walking while trying to keep his balance between the stones and the rugged terrain of the construction sites, Prof. Ibrahim Abu A'mar makes his way through the ruins of the home of Lazarus, Martha and Mary in Bethany. The “Betania” project by the NGO of the Custody, the ATS Pro Terra Sancta Association, has given those sites the opportunity to be set up, and day after day, it contributes to its enhancement. For years the place –where it is written that Jesus raised his friend Lazarus from the dead and where a church can be found, as well as the Franciscan monastery of the Custody of the Holy Land and an archaeological site– deterioration and abandonment had set in. “You cannot imagine how the site looked before it was cleaned. There were bottles and waste,” said the archaeologist Ibrahim Abu A'mar. Then, three years ago, the intervention of the then Custos of the Holy Land, Fr. Pierbattista Pizzaballa, changed everything. Carla Benelli, art historian and collaborator at the Pro Terra Sancta Association, explained. “When we were called together at the Mosaic Center, we started our first recovery excavations, involving the youth in the local community from the nearby Al-Quds University.” This is one of the reasons why Prof. Abu A'mar is working at the dig.

Recently, a new room was discovered to the left of the area where an oil press can be found, and where the ceiling is still being propped up. Moving to the upper floor, there are countless interventions that need to be carried out still. “Every six months we understand more and more,” explained the professor with an enthused look in his eyes. I think there are other rooms to explore, but we must continue digging.” In the 1950s, the Franciscan friars had begun the archaeological excavations but did not complete them. Decades later, thanks to the support of ATS and that of the Custos of the Holy Land, Bethany is attempting to rise again. “I started working here in 2014 and it is amazing how the situation has changed in just three years,” said Prof. Ibrahim Abu A'mar. Actions have been taken, such as installing barbed wire protection, because of the frequent intrusions and illegal excavations by those searching for precious objects to steal. “Right now we cannot continue without having the permits for the excavations. But we also have another big problem: we cannot manage the site because there are small pieces of land that belong to other churches,” explained the archaeologist.


“Most of the archaeological work of the past was carried out by people who came from outside and this sometimes created problems of interpretation and objectives,” said architect Osama Hamdam, the project supervisor in Bethany. If we want the universities and their scientific credibility to grow, we need to get them involved in research. This is a place that over time has been massacred, but there is still a chance to salvage something and I remain positive about the project.” The benefits to the local community are evident in the story of Hayman Nafee, the archaeologist and foreman in Bethany. Not having been able to find employment, despite being an archaeologist, he worked odd jobs until he became involved with the project at Lazarus’ house. “This job is a great opportunity for me to be part of something that I love, and to make a career in my area of specialty; it is a chance for me to develop myself. This job is truly an important part of my life,” said the young man.

In addition to the excavations, the general mission of the “Betania” project is “to widen the array of possibilities [of things to do and see] for visitors, and if visitors stay longer, it can also benefit the local community.” Carla Benelli explained: “In order to benefit the local community, we are working with women. Bethany has a close relationship with female figures because of Martha and Mary. Then, the monastery was built in the Middle Ages by Queen Melisende, while the Abbess of the convent was her sister Ivetta. At the end of 1800s, the first piece of land donated to the Franciscans here was by a French Marquise named Polinde Nicolai. This gave us the idea of working with the women's association of the village in order to re-launch the production of essential oils, to be sold so as to also have an economic impact.” The project does not stop there, because children from the local community are also being involved: two or three times a week, trips are organized to help them understand the importance of the place where they live.

For about ten years, there have been two Franciscan friars present at the monastery in Bethany: the local guardian, Fr. Michael Sarqua, and Fr. Eleazar Wronski. The village of Bethany, located in the Palestinian territory, on the slopes of the Mount of Olives, is predominantly Muslim and there are about twenty Christians who attend mass on Sundays. Even daily mass in the morning is almost deserted. “We have been somewhat abandoned because of the presence of the wall,” explained Fr. Eleazar Wronski. “Not being connected directly to Bethphage, it takes people an hour to come here and they often give up. Then, there are those who visit the place for a few minutes and then leave. But in order for visitors to see the more interesting things, we must encourage them to stay longer.”

Ceremony in Bethany marks the closing of the excavation site


Being re-born with Lazarus in Bethany

The fragrance of Easter comes to us from Bethany

Br Ramzi Sidawi: "Let's help each other with the Collection"

The convent on Mount Nebo, on the eve of the solemnity of St Moses