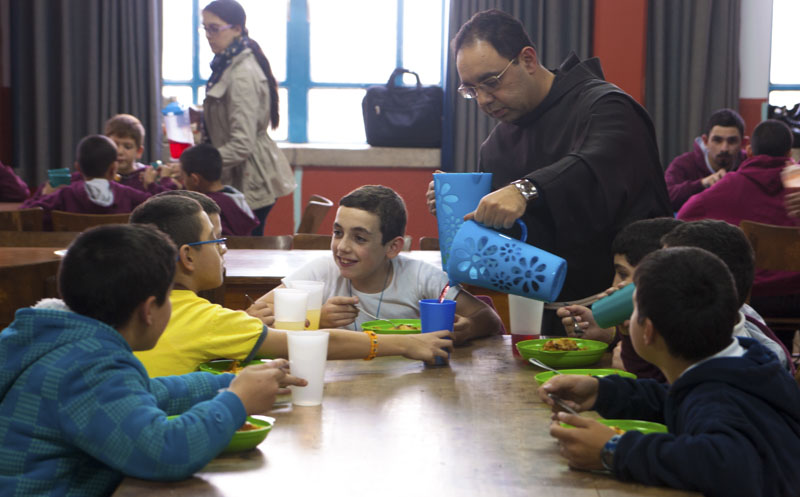 Your Excellency,
The Lenten Journey, which we are traveling, invites us to raise our eyes to the goal: we are following Our Lord Jesus Christ first to Golgotha and then, having descended with Him into the tomb, to experience the ever new and life-giving power of His Resurrection. The Holy Places of our faith are eloquent witnesses of this extraordinary event, which has changed the course of history and opened up a new hope for humanity.

From those places, the Easter proclamation has spread throughout the world, and it continues to spread. A Christian community has remained in those regions down through the centuries, even at the cost of great sacrifice and martyrdom. Since the first Pentecost, it has bravely shown the universal face of the Church to the world.

Our sense of communion in the suffering and risen Christ moves us again this year to undertake the important initiative that is the Collection for the Holy Land. Indeed, this effort manifests the bond of brotherhood that unites the universal Church to the Mother Church of Jerusalem, as the Holy Father has indicated. On the occasion of the Assembly of Organizations for Aid to the Oriental Churches (ROACO), on June 16, 2016, while referring to the ongoing restoration of the Basilica of the Nativity in Bethlehem and the Shrine of the Holy Sepulchre in Jerusalem, Pope Francis recalled the value, not only of the presence of the Church in the Holy Land, but also of the “[maintenance of] the holy places and shrines, also with the help of the yearly Good Friday Collection providently instituted by Blessed Paul VI”. Thanks to the generosity of so many, including non-Catholics, the restoration of these two sites, which are the common heritage of Christianity, is proceeding with remarkable results.

Today, as we know, living the Christian faith in the Middle East is not at all easy. Especially in Iraq, Syria and Egypt, where Christian communities have experienced an “ecumenism of blood”, individuals are daily pressured to abandon their land, or even their faith. Nor does freedom reign in the other countries of the region, where Christians are often subjected to forms of oppression and discrimination that undermine their living conditions.

Keeping hope alive in such circumstances is both difficult and vitally important. Consequently, the small Christian presence in the Middle East has great need of the support and attention of the entire Church. Constant prayer is the first and greatest assistance they seek. Also required, however, is concrete economic aid, taking into account what St. Paul wrote at the time of the first collection for Jerusalem: “Each one must do as he has made up his mind, not reluctantly or under compulsion, for God loves a cheerful giver” (2 Cor. 9:7).

Once again, from every part of the Church, expressions of solidarity come together effectively in the Good Friday Collection. This enables the Catholic communities of the Holy Land - the Latin Patriarchal Diocese of Jerusalem, the Franciscan Custody and other jurisdictions, especially Eastern ones (Greek-Melkite, Coptic, Maronite, Syrian, Chaldean, Armenian) along with religious communities and organizations of all kinds - to help, in their turn, the poor and suffering of every ethnicity and every faith, without distinction.

Parishes will continue their pastoral service with preferential attention to the poor. Schools will enable Christians and Muslims to prepare together a future of respect and partnership. Hospitals and clinics, hospices and community centers will continue to host the suffering and the needy, refugees and asylum-seekers, people of all ages and religions hit by the horrors of war. The unforgettable faces of thousands of children and teens, fleeing violence and persecution in Syria and Iraq, continue to challenge us, even as these young people, thanks to our Collection, are being welcomed by Christian schools in neighboring countries.

The pilgrimage, which is an important element of the vitality of the Church in the Holy Land, is an initiative always to be promoted. A journey to the Sacred Places in the footsteps of Christ can not only lead the pilgrim to a revival of his faith and a rediscovery of his origins, but it can also serve as a powerful instrument in the New Evangelization. In addition, pilgrimages are an essential resource for the Christian population of the Holy Land. In fact, according to recent statistics, at least 30% of the local community - in Jerusalem and in Bethlehem - live and work thanks to the presence of pilgrims.

As we prepare for Easter, let us renew our commitment to becoming artisans of peace, praying and working that peace may dwell in the heart of every person, especially of our brothers and sisters of the Holy Land and the Middle East.

To You, and to the Priests, Consecrated men and women and to the Faithful, who are helping to insure the success of the Collection, I have the joy of conveying the sincere gratitude of the Holy Father Francis, together with that of the Congregation for Eastern Churches. Finally, as I invoke on behalf of You, Your pastoral ministry and all the faithful of Your jurisdiction abundant divine blessings, I send You wishes for a very Happy Easter and my most fraternal greetings in the Lord Jesus.