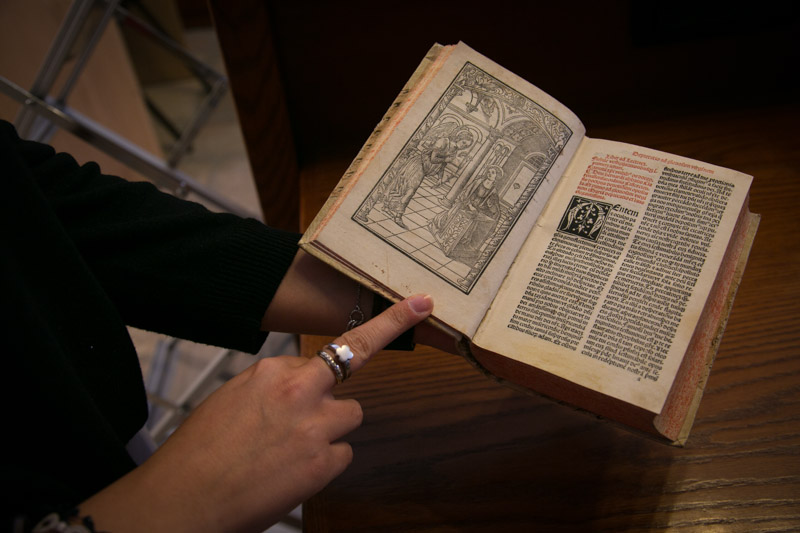 The library of the Custody of the Holy Land will present the “Ex Libris Conventus Aleppi—Books of the Franciscan Library of Aleppo” exhibition this Tuesday, June 23, at St. Savior’s Monastery. The twelve manuscripts on exhibit come from Aleppo and the majority of them date back to the fifteenth century and were brought to Jerusalem as a way of safeguarding this precious piece of cultural heritage.

Br. Lionel Goh, OFM, library director, said: “The situation of the city of Aleppo in Syria is getting worse. The so-called Islamic State is destroying books, works of art and relics of the past that do not fit inside of its vision. With this exhibition of manuscripts that we have managed to save, we want to stress the importance of preserving cultural heritage, the foundation of coexistence.”

About 20 ancient manuscripts were transported from Aleppo to the Franciscan convent of St. Savior in Jerusalem about 10 years ago. Br. Michele Piccirillo, ofm, now deceased, had taken the initiative to do this. “There are still many books in Syrian monasteries, but it is too complicated to move them now,” said Br. Lionel. The Franciscans have been present in Syria since the thirteenth century.

“We have chosen to exhibit a variety of the most interesting manuscripts,” said Francesca Turrisi, a volunteer who works with the ATS Pro Terra Santa NGO and the Catholic University of Milan. “Most of them have the seal of the monastery in Jerusalem and that of the convent in Aleppo, since they passed through here before being sent where the friars needed them, about five centuries ago. Unfortunately, today they had to make the opposite journey in order to be saved from destruction. “These are primarily textbooks on theology, morality or spirituality, written in Latin by different religious congregations. Fabrizio Fossati, also a volunteer at the library, said: “One of them begins with a panoramic view of the city of Aleppo at that time. But one of the most interesting ones, because of what it represents, is a book written in Arabic and Italian. It reminds us that dialogue necessitates knowledge of others, and of their language and culture, in a context where Daesh is trying to erase these dialogue experiences. Today, people in Syria are in need of housing, food and medicine, but we cannot save a man without also saving culture and traditions.”

Br. Lionel concluded: “We hope that, with this exhibition, people will become aware of the interest of protecting books, which are a part of the cultural heritage of the Middle East. Although Christians are persecuted there today, these books are one type of proof among many others that Christians are part of the history of this region.”

The exhibition will take place at the library of St. Savior’s Monastery. It will begin at 10:30 am with a keynote address by the Custos Fr. Pierbattista Pizzaballa, OFM, and it will close at 5 p.m.. Written explanations will also be available in English and Italian, as well as oral clarifications by both volunteers, Francesca Turrisi and Fabrizio Fosssati. The exhibition is open to all.