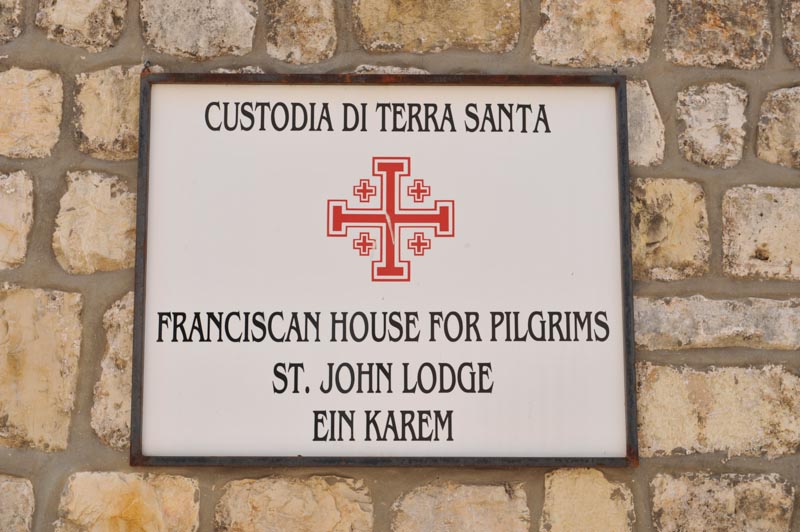 Nestled among terraced hills about ten kilometers west of Jerusalem, the village of Ain Karem has a special meaning for Christian pilgrims. It is known as the birthplace of Elizabeth, where her cousin the Virgin Mary visited her, and of her son, John the Baptist. This village of 2000 residents is also the site of the Churches of the Visitation (fourth century) and Saint John “in the Mountains” (fifth century), where one can pray at the grotto that is the traditional birthplace of Saint John. In addition to these two Franciscan sanctuaries, the village also includes a Greek Orthodox church and the Notre Dame de Sion convent. A few kilometers away, pilgrims in search of quiet or a ramble can refresh themselves at Saint John of the Desert.

Present here since the 12th century, the Franciscans lead a life of prayer and service to pilgrims. The Ain Karem monastery is also home to students in their first and second years of philosophy at the international seminary of the Custody of the Holy Land. At present, there are ten students and four friars. Among them is Fra Leszek, who is responsible for the sanctuary, better known as Fra Severino. On his arrival in September 2013, the Polish friar who in the past was director of the Bethlehem Casa Nova, took the site in hand and began a number of projects. “There was no longer a continuous presence in the Ain Karem Casa Nova even though the atmosphere of the village is in many ways different from Jerusalem. Our monastery and sanctuary are a true oasis; we must restore their value so that pilgrims can profit from them,” he explains. So was born the idea of reopening the Franciscan pilgrim hostelry.

For the past six months, employees and volunteers have been busy in the large 19th century buildings that still retain their beauty. They have also been working in the many gardens and nooks that are in full flower this spring. Fra Severino is optimistic: “In just six months we have already seen great changes; pilgrims are arriving in larger numbers. They particularly like the fraternal ambiance here.” Casa Nova is not a hotel, he insists: “We live simply here; for example, we have our chicken house and kitchen garden, cats and dogs. What we offer pilgrims is to share our healthy way of living and praying.” In fact, at the Ain Karem Casa Nova everyone rolls up their sleeves and pitches in, with Fra Severino leading the way. He works with a group of volunteers, mostly Poles and Italians, but Severino awaits all people of good will with open arms.

In the kitchen, for example, we meet Giuseppe, a Sicilian chef who came for a few months to lend a hand with the restoration. Today’s menu features one of the house specialties: goose! Yesterday it was chicken with rosemary from the garden and tiramisu for dessert; the house pastas are also greatly appreciated. Be it Fra Severino or the volunteers, everyone here likes good food and the house kitchen has nothing to be ashamed of in comparison to the best restaurants of Jerusalem. The rumor has already spread among the friars of the Custody: you eat well at Fra Severino’s table!

There is no end of anecdotes. For example, there were the thousand kilograms of sausages painstakingly prepared and cut… in one day. “It was a real project and a time of good camaraderie,” they recall. At their side is Stawomir, a young Pole with clear blue eyes who divides his time between working in the garden and serving at table. “Everything is carefully thought out and organized, each thing at its proper time, smiles Fra Severino as he strolls beneath the flowery arbors. “We recently installed Wi-Fi throughout the Casa Nova and we are also launching our Facebook page.”

Alongside all this activity Fra Severino enjoys a rich communal life with the friars. “You see me today without the Franciscan habit because I’m working outside, but in a few hours I’ll be sitting behind a desk teaching philosophy to our students.” The professor is filled with gratitude. “This plural mission that has been assigned to me brings with it much joy and much sense. We meet many pilgrims who need a listening ear, who know what they are looking for in the Holy Land. Being charged with running a hostelry means that I am able to take time to be with them, even though my time is tight!”

As we finish a delicious cappuccino offered by Giuseppe, we meet Fra Sergey and Ettore from the Custody’s technical office in Jerusalem. As we follow them around we discover restoration work on a huge, vaulted room beneath the monastery. “We hope to augment our hospitality by 200 covers so that we can accept large groups for seminars, for example. Outside there will be a long, sunlit terrace with a view over the hills and the churches of the Visitation.” Quality, simplicity, liberty: these are the words one takes away from this unique site that beckons you to spirituality.

For more information or to make reservations at the Casa Nova, please check the link to Casa Nova Ain Karem or the site’s Facebook page.