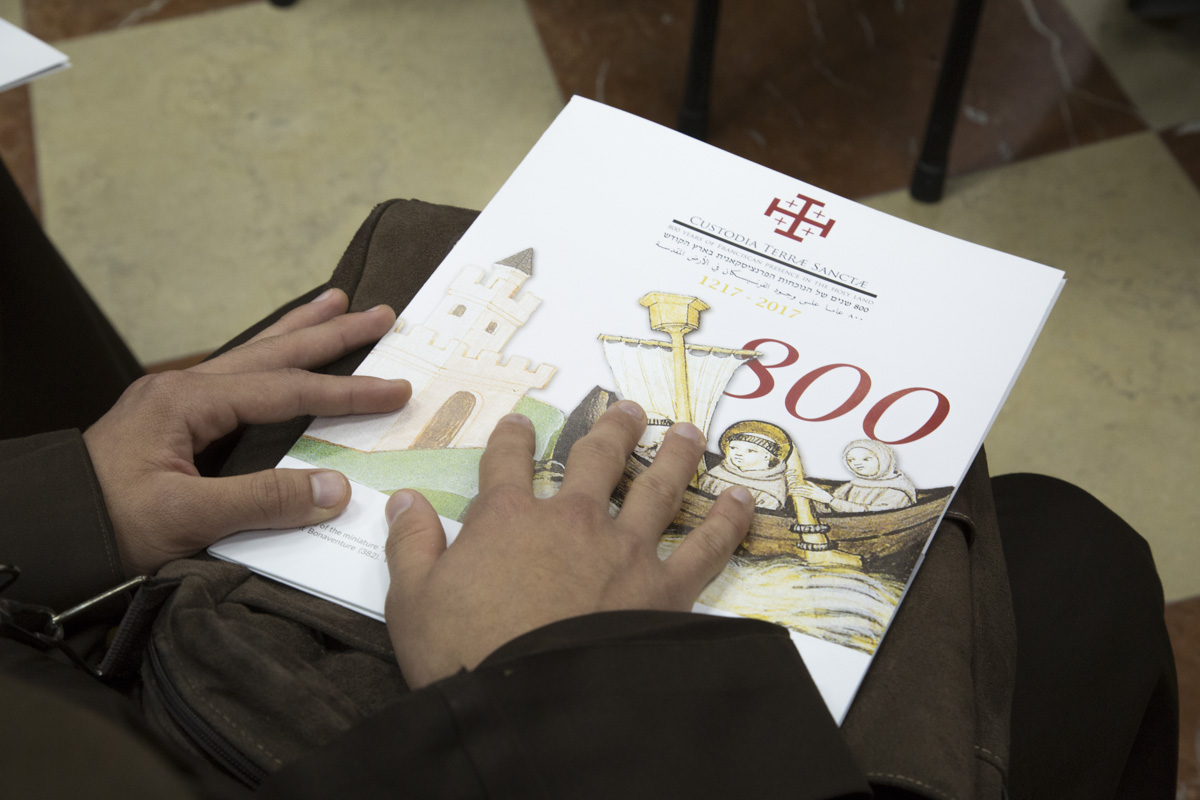 In Jerusalem, after days of celebration and [after welcoming] guests from all over the world, the celebrations for 800-year anniversary of the Franciscan presence in the Holy Land have come to an end. The third and final day was October 18, beginning with the mass celebrated by the Vicar General of the Order of Friars Minor, Fr. Julio César Bunader. "We are gathered here for the 800-year anniversary of Franciscan presence in the Holy Land and it is a great opportunity that the Lord gives us to remember the history of our Order,” said the Vicar General in his homily. We have been doing this with gratitude to God and to our friars for their generosity over the course of eight centuries since receiving the Lord’s missionary mandate.”

The day continued with a conference on Giotto’s frescoes in the Basilica of St. Francis in Assisi, of which replicas are displayed in the courtyard of the Custodial Curia. Prof. Lorenzo Cappelletti, of the Pontifical University Antonianum, provided analysis and interpretation of the frescoes at the auditorium of the Hall of the Immaculate [Mary] at St. Savior’s Monastery.

After the coffee break, the Custody’s archaeologist, Fr. Eugenio Alliata, delved into the fascinating reconstruction of the ancient Franciscan monastery on Mount Zion, which is located next to the Upper Room. By discussing iconography and archaeology, Fr. Alliata spoke about the place where the Franciscans lived for almost 220 years, but that that they have no longer been in charge of for more than 460 years. Prof. P. Narcyz Klimas, lecturer at the SBF-STJ, then spoke about the first Franciscan monasteries in the Middle East, pointing out the ancient sites on the map.

In the afternoon, Vespers with the Father Custos and a concert of thanksgiving at the Magnificat, the Custody’s music institute, concluded the celebrations.
The Father Custos, present at all of the events, repeatedly highlighted the importance of celebrating the eight centuries of [the Franciscans’] presence: “This year, we remember this 800-year-long history of the mission, and we commemorate what St. Francis did, sending the first friars, led by Friar Elia da Cortona to the Holy Land, here.

Mons. Pierbattista Pizzaballa, Apostolic Administrator of the Latin Patriarchate of Jerusalem, also attended the celebrations and some conferences and he concelebrated Cardinal Sandri’s mass on October 17. We asked him to talk about the Custody of the Holy Land on this anniversary.

You were the Custos of the Holy Land for 12 years and now you are the Apostolic Administrator of the Latin Patriarchate of Jerusalem. What have these years as a Franciscan in the Holy Land been like for you?
I have been living here in Jerusalem, and in the Holy Land, for 28 years now, as a Franciscan and now as a bishop. I must say that the social reality has changed a great deal, but there are some stable aspects in the life of the Church. The first examples are the churches themselves, the presence of the churches which, despite all of the difficulties, continue to carry on about their normal lives.
As for the Franciscans, I have seen the passing of several generations: some I have accompanied, and others I have helped to prepare. I see so much enthusiasm and the desire to always serve these lands with the same passion.

Italy’s Day of the Republic: The Custody pays tribute to Italy on its national holiday