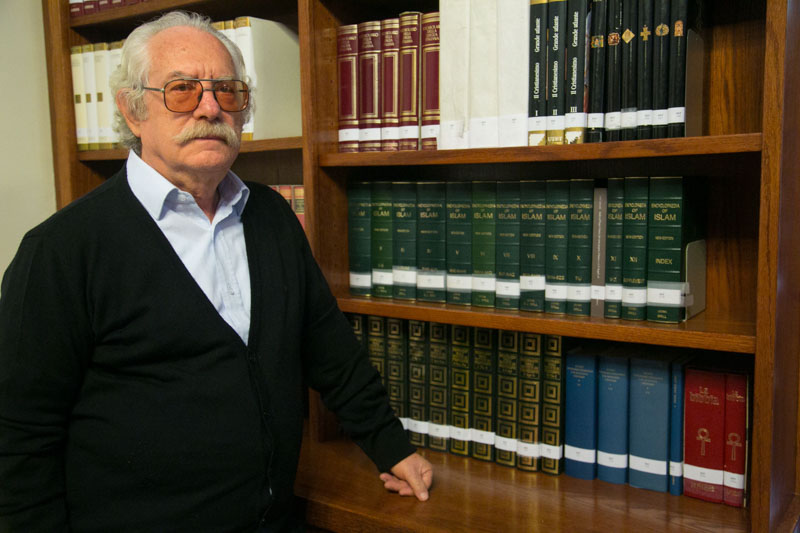 With its study centers, the Custody of the Holy Land is an important cultural reference point for the entire Holy Land. From the Franciscan Center of Eastern Christian Studies in Cairo, to the Studium Biblicum Franciscanum and to the Studium Theologicum Jerosolimitanum, brilliant scholars work every day to spread their knowledge. Among them, is the history expert Prof. Bartolomeo Pirone, who has been a researcher for the Custody of the Holy Land since 1980. Prof. Pirone shared his story directly from the small room of the historical archives of St. Savior’s Monastery in Jerusalem, which is his main place of work when he is in the Holy City. In fact, he has recently been working at the custodial archives to review the contents of a group of documents, so as to identify their language and content. “These documents are the legitimacy of the right of property of the Franciscans on different sanctuaries,” explained Prof. Pirone. “Some are from the Arab period and some are written in the Ottoman language.”

Originally from Sparanise, a town in the province of Caserta, in Southern Italy, Prof. Pirone has a vast curriculum. Former professor of Arabic Languages and Literature at the Oriental University of Naples, he has taught in the College of Literature and Philosophy at the University of Bari for five years. He also taught Islamic-Christian dialogue at the Conventual Theological Seminary of Assisi, at the Pontifical Lateran University, and at PISAI (Pontifical Institute of Arab and Islamic Studies). He served as a lecturer at the Universities of Cairo and Beirut.
His work for the Custody has focused on works by Arab-Christian authors in the Arabic language, both published and unpublished, which he translated and made available to scholars and to academic centers. The themes were different, from historiography to the liturgy, to the controversies between Islam and Christianity. His goal has always been to spread the knowledge of Arab-Christian literature. “Fr. Bellarmino Bagatti from the Studium Biblicum Franciscanum understood the importance of these texts, with the intent of finding historical information that could benefit the historical reconstruction of the Holy Land as such,” Prof. Pirone said. “He thus promoted a group of scholars who could mainly focus on Arab-Christian literature.”

The professor's work mainly took place in Cairo. However, the recovery and translation of interesting material, which could be published by the Franciscans of the Custody of the Holy Land, took place elsewhere.
“As a young man I was a student of the Custody,” said the scholar. “When I was 11, I entered a seraphic school in Rome, run by the Franciscan fathers of the Holy Land; the Arabic language was one of the subjects. A continuity of studies and acquaintances has always kept me tied to this institution.” Presently, Prof. Pirone it is still tied to the Custody, providing study materials to international and Italian students. The important documents on which he worked are the universal stories of the Arab-Christian authors, such as the universal story of Eutychius, the patriarch of the Alexandrine church in the late tenth century, or Agape of Gerapoli, his contemporary. Topics of great interest to Prof. Pirone are Arabic philosophy and geography, especially Egyptian geography. “ edited a paper on the lives of Egyptian saints, with testimonies translated directly from Arabic.”

In the Franciscan monastery in Jerusalem, he has been working for years on a cyclical course on Islam for the students of St. Savior’s Theological Seminary. “Mainly, though, my work involves documents,” Prof. Pirone explained with a smile. “All of that constitutes knowledge and it can help the dialectic, even the dialectic of exposure and argumentation, which is always useful for dialogue.”