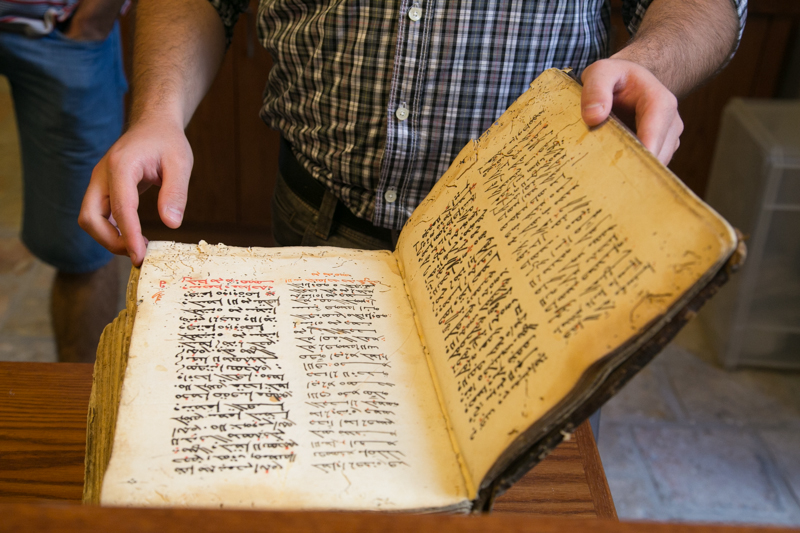 The Custodial Library at Saint Saviour Monastery in Jerusalem will open its doors to the public on Thursday, the 23rd of October for a one-day exhibition. Presenting thirty-six ancient manuscripts, the exhibition crowns the long labor of inventory.

Close to 550 precious manuscripts in all languages, most dating from the 14th and 16th centuries, were catalogued over the past two years. Some are dated as far back as the 11th century. They bear witness to the presence of the Franciscans in the Holy Land, but even more to the coexistence of all the communities and cultures that lived there. Texts were found not only in the Arabic, Greek and Hebrew alphabets, but also Armenian and Samaritan. Even more surprising are the manuscripts written in the Arabic language using the Hebrew or Syriac alphabets, tangible proof of the influences of the cultures on one another and of their coexistence.

The manuscripts deal mainly with Franciscan life in those centuries: liturgical documents, selections from the lives of the saints, but also narratives of voyages in the Holy Land, personal journals or medical books that were used in the dispensaries. Professor Edoardo Barbieiri, a researcher from the Catholic University of Milan who participated in the project, explains the importance of these manuscripts, vestiges of a bygone time. “A collection of manuscripts like this one is to history what the remains of a shipwreck washed up on shore is to a ship. We cannot truly know Franciscan life in the Holy Land in the 16th century, but thanks to these manuscripts we can become acquainted with a few fragments of it.”

The manuscripts were listed in the online catalog of the library of the Custody of the Holy Land. They are in the archives, but will now be accessible to academics who are researching this historical period: philologists, historians, historians of literature, art historians interested in the illuminations…

The library is used primarily by the students and seminarians of the Studium Theologicum Ierosolimitanum. However, its director, Fra Lionel Goh, explains that the target is also international. “We welcome researchers from all over the world who are interested in ancient codices, illuminated manuscripts, ancient pilgrim voyages or the history of the holy places.”

The inventory is an important step in the Books: Bridges of Peace collaborative project of the Custody, CRELEB (the European Center for Book Research), and the publishing house and libraries of the Catholic University of Milan. It is also supported by the NGO ATS pro Terra Sancta. Some twenty people are involved, including Marcello Mozzato (ATS pro Terra Sancta), Alessandro Tedesco and Professor Edoardo Barbieiri (CRELEB) and many students and volunteers, including Emilia Bignami, Elizabetta Passerini and Luca Rivali.

The goal is to allow academics of different backgrounds to meet, but also to show through the testimony of these manuscripts from the past that syncretism of cultures is possible in this part of the world. On another level, Professor Barbieiri further explains that it is also the wealth of contact and exchanges between the friars, the academics and the volunteers that adds value to the project. “Everyone is delighted to participate!”


The next step in the Books: Bridges of Peace project will be to transfer the catalog of the Flagellation library to that of the Custody library, thereby simplifying research and creating a catalog of some 2000 books printed in the 15th and 17th centuries.

Program for the October 23 Exhibition

9:00 a.m. – Opening the MFH Manuscripta Franciscana Hierosolymitana manuscript exhibition in the presence of the Custos of the Holy Land, Fra Pierbattista Pizzaballa.

Blessing of the library’s new stained glass window dedicated to Blessed Gabriele Allegra OFM in the General Library of the Custody of the Holy Land at Saint Saviour Monastery.

5:00 p.m. – Presentation of the online catalog of the MFH Manuscripta Franciscana Hierosolymitana in the hall of the Custodial Curia at Saint Saviour Monastery.

Welcoming remarks by Fra Lionel Goh OFM, director of the General Library of the Custody of the Holy Land.

Link to the online catalog of MFH Manuscripta Franciscana Hierosolymitana:http://www.bibliothecaterraesanctae.org/descrizione-inventario-manoscritti.html