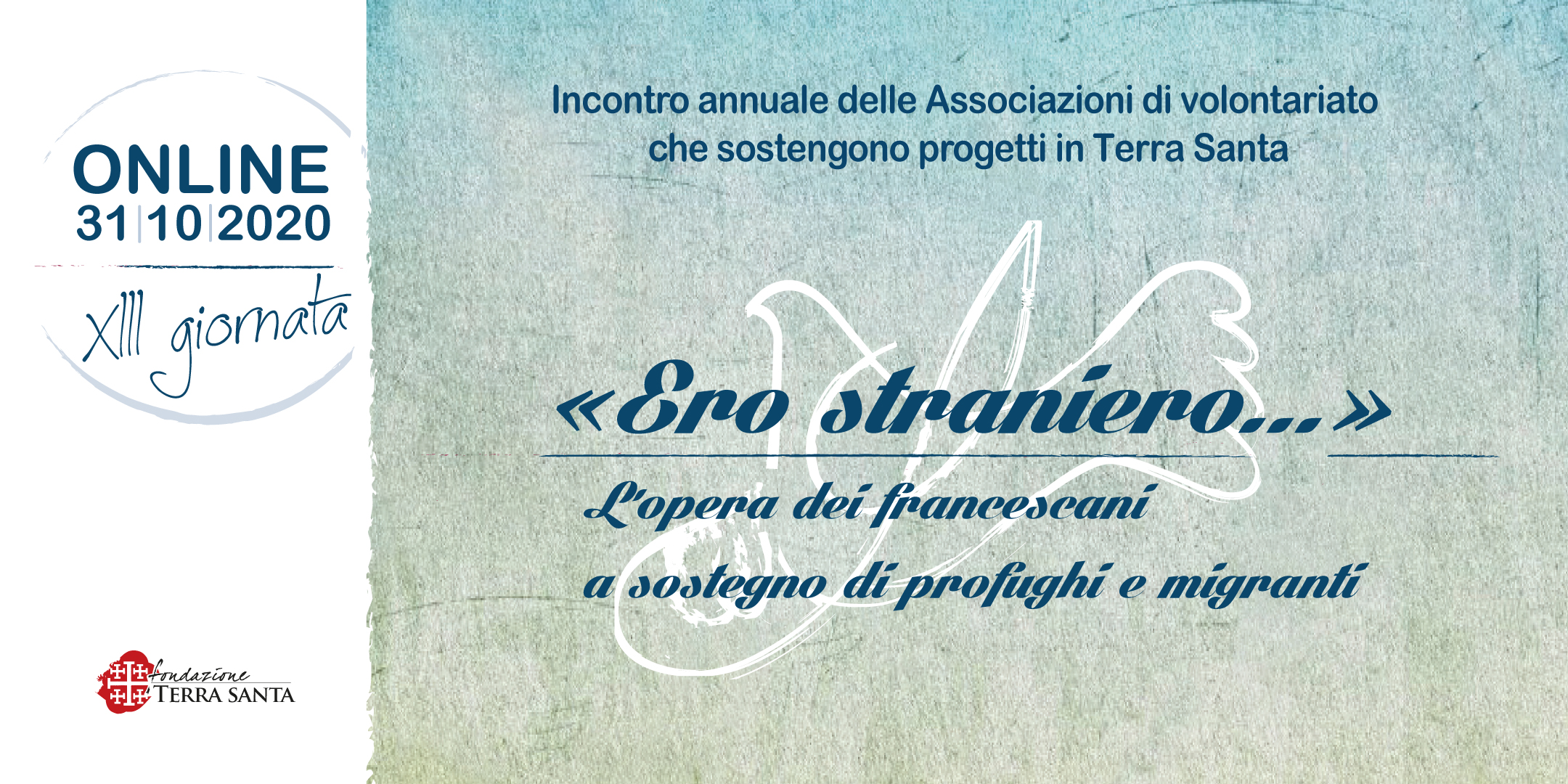 In spite of all the difficulties caused by the pandemic in Italy, the traditional Day of the voluntary associations which support projects in the Holy Land, now in its 13th year, is again being held this year.

Saturday 31st October, from 9.30 a.m. (until about 12.30 p.m.), wholly online and in Italian. The recent measures of the Italian government prevent a meeting in Rome with attendees, but a full programme of training and reflection is at the disposal of all the friends of the Holy Land.

The title of the Day, sponsored by the Milan-based Foundation for the Holy Land is: “I was a stranger…  The work of the Franciscans in support of refugees and migrants.” The tragic reality of so many people fleeing from the wars in the Middle East, of those who are blocked by barbed wire fences, or of those who – on their own or with their families – die at sea… all this challenges us.

The first speaker is Father Camillo Ripamonti, a Jesuit, president of the Centro Astalli who suggests a reflection what starts exactly from Jesus’s words “I was a stranger and you welcomed me.” In Rome and in other Italian cities, the Centro Astalli has been helping asylum seekers for forty years and promotes a culture of welcome and solidarity.

Professor Maurizio Ambrosini, a sociologist of the University of Milan and an expert of the phenomena of migration, in particular in Italy, speaks on “The imaginary invasion. Beyond the current narrations of migrations and asylum in Italy.”

This is followed by two accounts of some important concrete activities which the friars of the Custody of the Holy Land are carrying out for migrants and refugees. From Beirut Fr. Firas Lutfi, a friar minor and superior of the São Paulo Region, speaks to us of the never-ending drama of the Syrian refugees in Lebanon. Syria, lacerated by almost a decade of war, has millions of displaced people and refugees. Lebanon, increasingly weakened internally, has given shelter in recent years to almost one million people who have been faced by enormous difficulties.

Fr. John Luke Gregory, who is also a friar of the Custody and responsible for the mission in the Greek islands of Rhodes and Kos, in a link from Rhodes will speak about the help given to those who are trying to reach the Aegean islands from Turkey, in particular unaccompanied minors.

At the end of the Day we can hear the words of Fr. Francesco Patton. The Custos of the Holy Land, also being inspired by the new encyclical of Pope Francis, Fratelli tutti, offers us a reflection on the topic of fraternity and the commitment of the Custody in the lands affected by violent conflicts.

The unusual method of the meeting does not allow, unfortunately, any presentations or exchanges by the associations which are taking part or celebrating a Holy Mass for the Holy Land. But we are confident that even remotely, may will join this occasion of formation, growth and spiritual closeness.

For the details of the programme and registration: https://bit.ly/2TwomDS

A few hours before the start, you will receive an email with the link to take part.