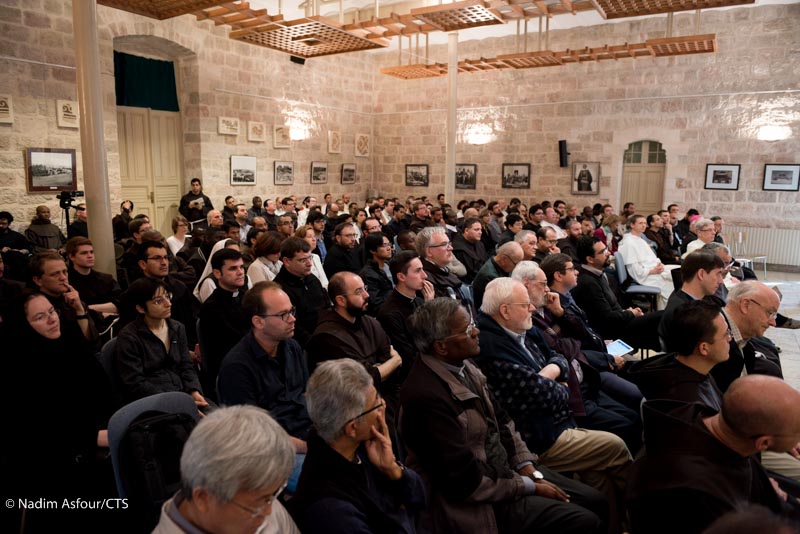 Franciscans and Dominicans in Jerusalem came together for an important event: the 2017-18 Dies Academicus for their Biblical institutes. On November 15, the Studium Biblicum Franciscum and the École Biblique et Archéologique Française organized the meeting in which new school year curriculum was presented. At the École Biblique headquarters, director Jean-Jacques Pérennès welcomed the numerous participants, together with Fr. Rosario Pierri, dean of the SBF.
Mons. Marco Formica, who is responsible for the affairs of the Holy See, brought his greetings. He recalled when the two institutions were founded, and how over the years they reached a considerable scientific standing and built a climate of friendship, which they now use for mutual collaboration. “Both institutes are not only at the service of the local church, but they are truly universal,” he said. “People come from all over the world to have the privilege of studying here.” Mons. Marco Formica also talked about the privilege of being able to work in Jerusalem: “We must recognize that it is a gift from God not only to study or visit the holy places but also to live alongside the local Catholic community.”

Fr. Timothy Radcliffe then gave a lesson on the topic of “Why do preachers need biblical scholars?” “Why are biblical studies absolutely necessary in the life of a preacher?, asked the charismatic priest for in front of an audience composed of mostly religious. Fr. Timothy's response was: “First of all because it deals with the Truth. Second, deepening the preaching of the Gospel helps us to understand how revelation came about in human history and helps us to preach with a word that is stronger. Third, true, in-depth instruction is a path to holiness.”
Then, Fr. Rosario Pierri presented the activities of Studium Biblicum Franciscanum. He first went over the last year’s events, including the various conferences and the theological and biblical formation course in which more than a hundred people participated. Collaboration between the two institutes has been consolidated because, as in previous years, students enrolled in the Ph.D. program could include the linguistic and exegetical courses offered at the École Biblique in their courses of study. “In this 2017-18 school year, 69 students are enrolled at the SBF, nine more than last year,” said Fr. Rosario. “I would also like to point out the launching of a new Bible-based diploma approved by the Antonianum in Rome.”

After a brief pause, the floor was given to Fr. Gregor Geiger, professor of Hebrew at the SBF, who presented the new Holy Land Guide, which came out just a few months prior. The friar wrote the most up-to-date guide to Jesus’ land, beginning with that of his master, Fr. Heinrich Fürst, who passed away in 2014. Fr. Gregor also received support from archaeologist Fr. Eugenio Alliata, as he explained himself, saying on a humorous note, “If there is an answer to a question, he knows it.”
The activities of the École Biblique et Archéologique Française were then presented by its director Jean-Jacques Pérennès.

Also present at the event was was the patriarchal vicar for Jerusalem and Palestine, Mons. Giacinto Boulos Marcuzzo. “It is a grace for the Holy Land to have these institutes of learning,” said Bishop Marcuzzo. “In Jerusalem, we have the SBF, the École Biblique and then the Jesuit Biblical Institute of Study, in addition to the university courses offered by the Salesians of the Latin Patriarchate and by Benedictine fathers. The specialty of these studies is that they are about the word of God and that they are in loco, in other words, in the places of the Holy Land.” Mons. Marcuzzo emphasized the importance of the contribution that these institutes can bring if they work according to the right method: “You cannot go on with research unless you act on the basis of the reality of the Bible and the land. This allows us to make progress in our knowledge of the Word of God and of the history of the faith and of the Church.”